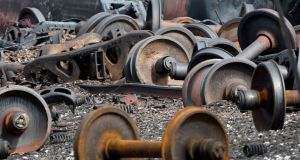 Axle gear in Lac-Megantic, Quebec, after a crude oil freight train derailed and blew up in the small town on Saturday morning. Photograph: Mathieu Belanger/Reuters

Residents of the town of Lac-Megantic in Quebec are still coming to grips with the reality that 50 people are most likely dead in the aftermath of the worst railway disaster in North America in more than two decades.

Five days after a train hauling 72 cylinders of crude oil derailed and exploded into a wall of fire, provincial police said they had recovered 20 bodies, with another 30 people still missing and presumed dead.

“She’s dead,” said Jean-Guy Lapierre of his niece, holding a copy of a Quebec tabloid that had printed pictures of some of the town’s missing young people on its front page. “She was just 28.”

The crash and subsequent explosions rocked the eastern Canadian town of Lac-Megantic shortly after 1am on Saturday, leveling its downtown strip.

Numerous houses and businesses were burned to the ground.

Ed Burkhardt, the chairman of the railway company, yesterday said the engineer probably did not set enough handbrakes when he parked his train some eight miles (13km) west of town late on Friday, leading to the deadly accident. The official apologised to residents of the town of about 6,000.

The words of remorse came too late for many locals, however, who remain angry at the company - Montreal Maine and Atlantic - and accuse Mr Burkhardt of shirking responsibility for the incident.

“They still aren’t taking the blame,” said Christiane, a woman who lived near the blast site and declined to give her last name. “First it’s the firemen, now the engineer, who will they blame tomorrow?”

Mr Burkhardt had previously said the air brakes that would have prevented the disaster failed because they were powered by an engine that was shut down by firefighters as they dealt with a fire shortly before the catastrophe occurred.

Yesterday, his focus was squarely on the engineer.

“It’s very questionable whether the hand brakes were properly applied on this train,” he told a crush of reporters. “As a matter of fact, I’ll say they weren’t, or we wouldn’t have had this incident.”

More than 200 investigators are working day and night to sift through the charred wreckage in the centre of Lac-Megantic in what authorities say is a crime scene. They have made no arrests.

A death toll of 50, if confirmed, would make the incident Canada’s deadliest since in 1998, when a Swissair jet crashed into the Atlantic off the coast of Nova Scotia, killing 229 people.

It would also be North America’s worst rail crash since 1989, when 112 people died when an 11-car passenger train plunged off a bridge in Mexico.

There have been glimmers of hope in some instances too.

Nicole Carrier, who works at a local hospital, was shocked to open a newspaper yesterday morning to see her own face under the headline: ‘Have you seen these people?’

“It’s Facebook’s fault,” said Ms Carrier, explaining that a friend’s daughter had posted a frantic message on the social media service asking whether Ms Carrier and her partner were still alive. The couple, who were evacuated from their home and did not have access to the internet, did not respond.

Her partner, Bernard Fortier, added that their faces were still being broadcast on television as part of the missing.

“This morning, I went to the police station, and they said, ‘Oh, we’re so happy to see you alive, Mr Fortier,’” he said with a smile.

MMA is one of many North American railroads that have stepped up crude oil-by-rail deliveries as producers seek alternatives to pipelines that have been stretched to capacity by higher US and Canadian output.

That has led to a shift in the type of rail cars passing through small towns such as Lac-Megantic. According to residents, the trains used to carry mainly lumber, but now they carry various hazardous materials.

1 Miriam Lord: Does anyone care if Leo smoked or snorted?
2 Asylum claims by Georgians and Albanians brought to abrupt halt
3 Fresh delays and millions in extra costs for children’s hospital revealed
4 Child (4) died of viral infection following nap at Cork creche
5 Snow on the way as weather set to turn colder
Real news has value SUBSCRIBE