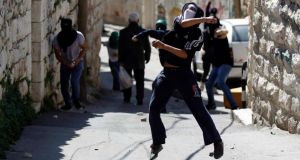 A Palestinian protester throws a stone towards Israeli policemen during clashes after Friday payers in the Arab east Jerusalem neighbourhood of Ras al-Amud. Photograph: Ammar Awad/Reuters.

A UN human rights investigator today accused Israel of “ethnic cleansing” in pushing Palestinians out of East Jerusalem and cast doubt that the Israeli government could accept a Palestinian state in the current climate.

He spoke against a backdrop of deadlocked peace talks and accelerating Israeli settlement expansion in the occupied West Bank and East Jerusalem which Palestinians say is dimming their hope of establishing a viable state on contiguous territory.

Israel says Palestinian refusal to recognise it as a Jewish state is the main obstacle. US president Barack Obama this week pressed Palestinian president Mahmoud Abbas to help break the impasse, saying both sides must take political risks before the April 29th deadline for a framework deal.

“Every increment of enlarging the settlements or every incident of house demolition is a way of worsening the situation confronting the Palestinian people and reducing what prospects they might have as the outcome of supposed peace negotiations.”

Asked about his accusation of ethnic cleansing, Mr Falk said that more than 11,000 Palestinians had lost their right to live in Jerusalem since 1996 due to Israel imposing residency laws favouring Jews and revoking Palestinian residence permits.

“The 11,000 is just the tip of the iceberg because many more are faced with possible challenges to their residency rights.”

This compounded the “ordeal of this extended, prolonged occupation”, according to Mr Falk, an international law expert and professor emeritus at Princeton University in the United States.

Israel captured the West Bank, Gaza Strip and East Jerusalem in the 1967 Middle East war and later annexed the latter, declaring it part of its eternal, indivisible capital, a move never recognised internationally.

Mr Falk said that Israel had made a systematic effort to “change the ethnic composition” of East Jerusalem by making it more difficult for Palestinians to reside there while encouraging the spread of settlements, which are considered illegal under international law.

In a report last month, Falk said Israeli policies in the West Bank appeared to amount to “apartheid and segregation” with a de facto annexation of parts of the territory, denying the Palestinian right to self-determination.

There was no immediate Israeli response to his remarks on Friday. Israel has not responded officially to Falk’s February report via the president of the U.N. Human Rights Council, the usual channel, U.N. officials in Geneva said.

In the past Israel has strongly denied accusations of persecuting Palestinians, accusing them of inciting anti-Israeli violence and being unwilling to make permanent peace with the Jewish state.