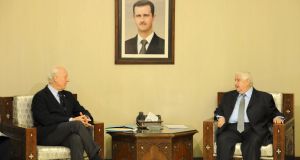 The Syrian government has approved access to seven besieged areas and UN convoys are expected to set off in days, the United Nations said yesterday after crisis talks in Damascus.

UN special envoy Staffan de Mistura, who won the green light at talks with foreign minister Walid al-Moualem, said the world body would test the government commitment to allow access today but gave no details. Their meeting in Damascus came at a time when government forces have been advancing rapidly with the aid of Russian air strikes, and just days before an internationally agreed pause in fighting is due to take effect.

Mr de Mistura said they had discussed the issue of humanitarian access to areas besieged by all sides in the five-year war.

“It is clear it is the duty of the government of Syria to want to reach every Syrian person wherever they are and allow the UN to bring humanitarian aid,” Mr de Mistura said in a statement. “Tomorrow we test this.”

“Humanitarian agencies and partners are preparing convoys for these areas, to depart as soon as possible in the coming days,” the OCHA said. It was not immediately clear whether the convoys would begin today, as Mr de Mistura had indicated.

Nor was there any indication of a breakthrough on access to areas besieged by armed opposition groups.

UN-backed peace talks are scheduled to resume in Geneva on February 25th, after Mr de Mistura suspended a first round earlier this month.

Last Friday global powers meeting in Munich agreed to the pause in fighting in the hope that this could allow the talks to resume, but the deal does not take effect until the end of this week and was not signed by the Syrian warring parties.

The Syrian government is meanwhile advancing in the north of the country with Russian air support.

Damascus says its main objectives are to recapture Aleppo – Syria’s biggest city before the war – and seal the Turkish border, lifeline of rebel-held territory for years.

Those would be the biggest victories for Damascus of the war so far, and would all but end rebel hopes of overthrowing President Bashar al-Assad.

Meanwhile, the UN has reported that hospitals have been struck in northern Syria in areas where Russian and Syrian warplanes are launching air strikes as part of their advance.

Jennifer O’Connell: Why are women in midlife so unhappy?