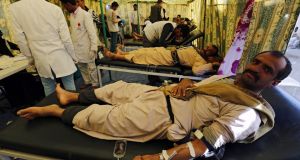 At least four people have been killed and 10 injured after an MSF-supported hospital was hit by a rocket or bomb in northern Yemen, the medical aid group said.

Three of the injured were Médecins Sans Frontières staff, with two reported to be in critical condition. MSF said the “projectile” struck the Shiara hospital in the Razeh district of Saada province at 9.20am local time yesterday, leading to “the collapse of several buildings of the medical facility”.

MSF could not confirm the origin of the attack, but said planes were seen flying over the hospital at the time. At least one other projectile fell near the hospital. All staff and patients have evacuated and patients are being transferred to Al Goumoury hospital in Saada, also supported by MSF.

Saada, a stronghold of the Iranian-backed Houthi rebels, has faced a particularly intense bombardment from the Saudi-led coalition supporting the Yemeni government.

Raquel Ayora, MSF’s director of operations, said: “There is no way that anyone with the capacity to carry out an airstrike or launch a rocket would not have known that the Shiara hospital was a functioning health facility providing critical services and supported by MSF.”

Ayora said: “We strongly condemn this incident that confirms a worrying pattern of attacks to essential medical services and express our strongest outrage as this will leave a very fragile population without healthcare for weeks.

“Once more, it is civilians that bear the brunt of this war,” she said.

In Afghanistan, an MSF hospital in the city of Kunduz was bombed by US forces on October 3rd, killing at least 22 people. About 5,600 people have been killed in Yemen’s civil war, according to the World Health Organisation. – (Guardian service)