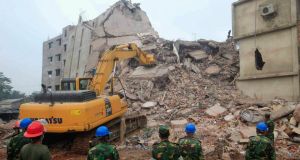 The scene at the Rana Plaza building collapse in Savar, Bangladesh, earlier today, where rescue workers have almost no hope of finding any more survivors. Photograph: Sajid Hossain/Reuters

Two western retailers have promised to compensate families of garment workers killed while making clothes for the retailers in a Bangladesh factory building that collapsed last week in the country’s worst industrial accident.

The pledge from Britain’s Primark (operating under the Penneys brand in Ireland) and Canada’s Loblaw came after the owner of the collapsed Rana Plaza was brought before a court in Dhaka yesterday.

At least 385 people have been killed in the disaster - the latest incident to raise serious questions about worker safety and low wages in the poor South Asian country that relies on garments for 80 per cent of its exports.

With almost no hope left of finding further survivors, heavy machinery was used to start clearing the mass of concrete and debris from the site in the commercial suburb of Savar, about 30 km (20 miles) from the capital, Dhaka.

Eight people have been arrested - four factory bosses, two engineers, building owner Mohammed Sohel Rana and his father, Abdul Khalek. Police are looking for a fifth factory boss, Spanish citizen David Mayor, although it was unclear whether he was in Bangladesh at the time of the incident.

There were angry scenes as Mr Rana, a local leader of the ruling Awami League’s youth front, was led into court yesterday wearing a helmet and protective police jacket, witnesses said.

Mr Rana, who was arrested on Sunday by the elite Rapid Action Battalion apparently trying to flee to India, was ordered to be held on remand for 15 days for interrogation.

Mr Khalek, who officials said was named in documents as a legal owner of the Rana Plaza building, was arrested in Dhaka yesterday. Those being held face charges of faulty construction and causing unlawful death. Bangladesh carries out the death penalty for murder and for most serious categories of manslaughter.

About 2,500 people have been rescued from the wrecked building, which housed several factories on the upper floors, but hundreds of the mostly female workers who are thought to have been inside remain unaccounted for.

The collapse was the third major industrial incident in five months in Bangladesh, the second-largest exporter of garments in the world behind China. In November, a fire at the Tazreen Fashion factory in a suburb of Dhaka killed 112 people.

The industry employs about 3.6 million people, most of them women, some of whom earn as little as $38 a month.

Anger over the disaster has sparked days of protests and clashes. Many factories remained closed yestderday due to labour unrest and police used tear-gas to quell demonstrations.

Primark, which was supplied by one of the factories operating at Rana Plaza, said yesterday it was working with a local NGO to help victims of the disaster.

“Primark will pay compensation to the victims of this disaster who worked for its supplier,” said the company, owned by FTSE 100-listed Associated British Foods.

“This will include the provision of long-term aid for children who have lost parents, financial aid for those injured and payments to the families of the deceased.”

Loblaw Companies Ltd, which had some of its Joe Fresh clothing line manufactured at Rana Plaza, said it too was offering compensation.

“We are working to ensure that we will deliver support in the best and most meaningful way possible, and with the goal of ensuring that victims and their families receive benefits now and in the future,” said spokeswoman Julija Hunter in an email.

Spain’s fashion label Mango told its followers on Facebook at the weekend that it had not carried out a “social audit” of Mayor’s company Phantom-Tak, with which it had an unfilled sample order, but would have done so had it gone on to place a full order.

The International Labour Organisation (ILO), an agency of the United Nations, said it was sending a high-level mission to Bangladesh in the coming days.

Officials in Bangladesh have said the eight-storey complex had been built on swampy ground without the correct permits, and more than 3,000 workers - most of them young women - entered the building last Wednesday morning despite warnings that it was structurally unsafe.

A bank and shops in the building closed after a jolt was felt and cracks were noticed on some pillars on the Tuesday.