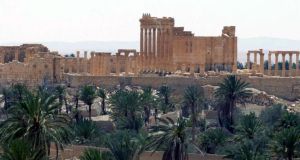 The ancient Roman city of Palmyra, northeast of Damascus, before it was overrrun by Islamic State forces. The advance of the jihadists in both Iraq and Syria has forced their opponents to reappraise strategy. Photograph: AP 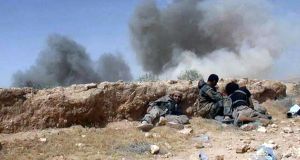 Islamic State fighters take cover during a battle against Syrian government forces on a road between Homs and Palmyra, Syria. Photograph: AP

Islamic State fighters are celebrating their second major conquest in a week in Syria and Iraq as they pick through the ruins of the historic city of Palmyra.

The sudden advance of the militants into the UN heritage site in central Syria resulted in the rout of a national army, the exodus of refugees and a fresh pulse of regional alarm at the resilience of the self-styled caliphate force.

The UN said one-third of Palmyra’s 200,000-strong population had fled. And IS militants used social media to show themselves posing amid ancient columns in Palmyra yesterday. Other images displayed a more familiar theme: the summary slaughter of local men whose blood drenched the road.

IS’s latest advance has prompted a re-evaluation across the region, which had earlier sensed it might be in retreat. From Beirut to Baghdad and as far away as Riyadh, regional actors are coming to terms with an organisation that can win most of its battles and successfully storm Syria and Iraq’s best-defended bastions.

The seizure of Palmyra followed the equally startling conquest of Ramadi in Iraq’s Anbar province last weekend. Both operations, almost 1,000km apart, have become emblematic of a terror group that can have its way across two crumbling countries despite embattled state forces being propped up by global powers. 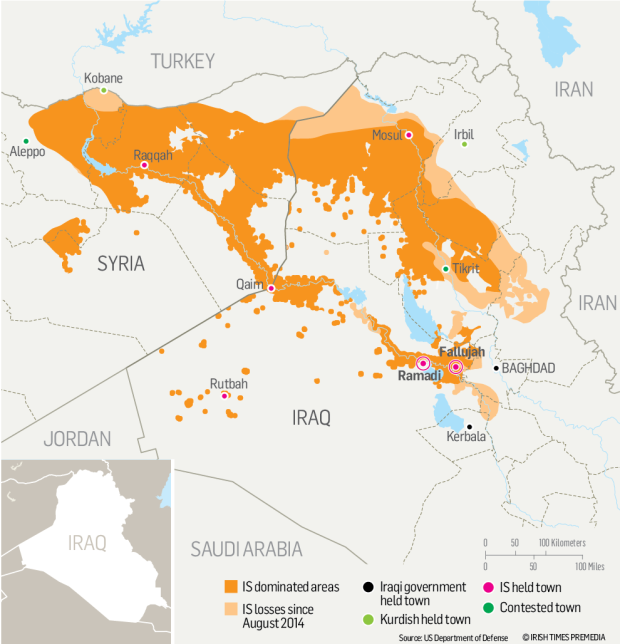 Ramadi in Iraq, meanwhile, had been a holdout in the heart of the country’s most hostile province – a place where local Sunni leaders allied with the Shia-led government and its militia proxies to keep IS at bay.

That too changed in fewer than 72 hours of clashes, where top-tier troops and tribes posed little resistance. In both cases, once the battles started going badly, state forces surrendered the cities to their fate, leaving large amounts of ammunition behind.

“They wanted to defend this area,” said a government official who fled Palmyra for Damascus yesterday. “They even tried to. But if that’s the best that they can do when they try, then the country is lost.”

Officials who had fled Palmyra said aircraft from the US-led coalition that had bombed IS targets elsewhere in the country had not joined the fight. US aircraft were instrumental in beating the terror group back from the two cities it has lost so far – Kobani, in Syria’s north, and Tikrit, in central Iraq.

In both countries, residents said the IS victories said perhaps more about the weakness of the states than about the potency of the jihadis. And while the Syrian Observatory for Human Rights said the fall of Palmyra meant IS now controlled more than 50 per cent of the country, opposition groups countered by saying that battle lines elsewhere in Syria had not shifted in IS’s favour since 2013.

Gains against the Syrian regime, they said, had been made by groups who previously fought IS and included an amalgam of mainstream fighters and jihadis, among them the ascendant al-Nusra front, which like IS has been prescribed by the US and much of Europe as a terrorist group.

The anti-Assad opposition played no role in the Palmyra clashes. Regime troops had been the area’s primary defenders.

In Ramadi, despair was endemic. “There are no police left,” said the police chief, Col Jabbar al-Assif, himself a recent exile. “Everyone left was killed or is injured. Whoever didn’t make it out, was killed later on by Isis [IS]. They have a list of all the policemen and the soldiers, with addresses, and they were going to their homes to kill them. So all of the police families fled too.

The IS advances mark a sharp turnaround from events earlier this year when it lost Kobani and Tikrit and was forced to retreat from about 20,000sq km of land in northern Iraq. That had led to claims that it could not hold its gains, and that after a year in which the sociopolitics of the Middle East had been overturned, IS could no longer secure its objectives. “If the state was strong, then that would be the case,” said an army officer who ordered his men to flee Ramadi. “They are not winning because they are powerful. They are winning because we are weak. I’m not sure about Syria, but I think it’s the same there.”

Thirty miles closer to Baghdad, in the city of Falluja, which is also under IS control, some residents say they have got used to the jihadis in their midst and have come to prefer them to the vagaries of central government rule.

IS vs Iraqi government