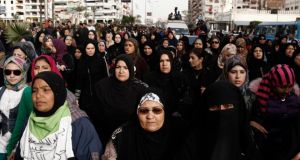 Egyptian women on the streets in Port Said. Groups claim women have been attacked while on demonstrations in order to discourage them from taking part. Photograph: Ed Giles/Getty Images

Muslim Brotherhood has held up finalisation and promulgation of a UN document dealing with violence against women, claiming it violates Islamic law, principles and traditions and undermines family values.

The draft text, due to be issued by the UN Commission on the Status of Women today, calls for the “elimination and prevention of all forms of violence against women and girls”.

The Brotherhood contests provisions on sexual abuse, sexual rights, sexual health and the right of women to control their sexuality. Specifically, it opposes provisions calling for equal inheritance rights, equality within the family, raising the legal age for marriage and granting permission for Muslim women to marry non-Muslims.

The movement also objects to permitting Muslim women to travel, work and use contraception without the approval of male relatives. It argues the document is “deceitful” because it would give women the choice of abortion “under the guise of sexual and reproductive rights”.

Adoption of the document would “lead to social disintegration”, the Brotherhood claims. It said in a statement: “The Muslim Brotherhood calls on leaders of Islamic countries, their foreign ministers and representatives in the Un ited Nations to reject and condemn this document.”


Influence
Since it rules Egypt, the most populous Arab country, the Brotherhood wields considerable influence with Muslim governments. On the issue of women’s rights, it has also secured the backing of Russia, Poland and the Vatican.

On the issues of sexual freedom, abortion and homosexuality, conservative Muslims and Christians have made common cause for years.

Sexual harassment, rape and assaults against women have increased in Egypt since the fall of president Hosni Mubarak two years ago, prompting criticism of president Mohamed Morsi and his government for failing to tackle the phenomenon.

Women’s groups contend attacks during demonstrations against Brotherhood policies are being carried out with the aim of ending women’s participation. At least 29 assaults by gangs of men were reported on January 25th, during a rally in Cairo marking the anniversary of the 2011 uprising.

A World Bank report said that up to 70 per cent of women suffer violence in their lifetime, and that women aged 15-44 are “more at risk from domestic violence than from cancer, car accidents, war and malaria”.

The most common form of violence committed against women is physical abuse including beatings and rape by a partner.