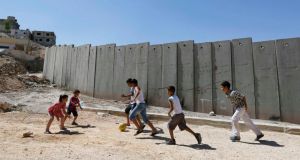 Palestinian children play near a section of the controversial Israeli barrier in Shuafat refugee camp in the West Bank near Jerusalem. Photograph: Reuters/Ammar Awad

Despite the resumption of peace talks with the Palestinians, Israel has added a number of outlying West Bank settlements to a list of communities entitled to special government funding.

Ninety settlements were included on the new national priority areas map approved by the government yesterday, entitling the communities to government grants, infrastructure investment, tax breaks and other benefits.

Four dovish ministers abstained in the vote, including environment minister Amir Peretz, who criticised the decision because it “contradicts this period of efforts to advance peace”.

Among the new settlements eligible for special financial assistance are the isolated communities of Rehalim, Bruchin and Sansana, considered illegal outposts until the government changed their status to fully fledged settlements.

The future of the settlements will be a core issue when Israeli and Palestinian negotiators resume peace talks in Israel next week. Israel wants to keep the majority of settlers by annexing the main settlement blocs to Israel and handing over parts of Israeli territory to the Palestinians in a land-swap deal.

The new map includes 600 towns and regions as priority areas. The original aim of the national priority list was to divert funds to poorer communities, particularly development towns on Israel’s periphery. However, the settler lobby has added West Bank Jewish communities to the list, citing “national security” criteria.

Justice minister Tzipi Livni, who heads Israel’s team at the peace talks, abstained in the cabinet vote, saying the national priority map was intended to advance the national interest, not political interests. “It’s inappropriate to take funds intended to tackle socioeconomic gaps and use them to support outlying settlements in dangerous areas,” she said.

“The decision to include settlements, whose legal status are clouded by doubt, to the map of national priorities, is a targeted effort to prevent the peace efforts and will encourage the settlers to continue to violate the law . . .”

Meanwhile, negotiators from both sides confirmed that Israel will release 26 veteran Palestinian prisoners next week. The release is the first batch of four, staggered at the request of Israel.

It is believed that the freeing of long-term detainees, nearly all arrested before the signing of the Oslo peace accords 20 years ago, will boost the standing of President Mahmoud Abbas on the Palestinian street.

The Palestinians insist all prisoners should be freed if a comprehensive deal is reached.