Islamic fighters advance in Syria despite US strikes

Islamist militants in Algeria claim to have beheaded French hostage 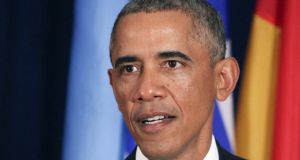 US President Barack Obama: “Military air strikes will continue as long as necessary.”

US aircraft pounded Islamic State positions in Syria for a second day yesterday, but the strikes did not halt the fighters’ advance in a Kurdish area where fleeing refugees told of villages burned and captives beheaded.

US president Barack Obama, speaking at the United Nations, asked the world to join together to fight the militants and vowed to keep up military pressure against them. “The only language understood by killers like this is the language of force, so the United States of America will work with a broad coalition to dismantle this network of death,” said Mr Obama in a 40-minute speech to the UN General Assembly.

Islamist militants in Algeria boasted in a video they had beheaded a French hostage captured on Sunday to punish Paris for joining air strikes against Islamic State in Iraq and Syria. French president François Hollande confirmed the execution.

“My determination is total and this aggression only strengthens it,” said Mr Hollande. “The military air strikes will continue as long as necessary.”

The United States said it was still assessing whether Mohsin al-Fadhli, a senior figure in the al-Qaeda-linked group Khorasan, had been killed in a US strike in Syria.

A US official earlier said Mr Fadhli, an associate of al-Qaeda founder Osama bin Laden, was thought to have been killed in the first day of strikes on Syria. Washington describes Khorasan as a separate group from Islamic State, made up of al-Qaeda veterans planning attacks on the West from a base in Syria.

Washington and its Arab allies killed scores of Islamic State fighters in the opening 24 hours of air strikes, the first direct US foray into Syria two weeks after Mr Obama pledged to hit the group. – (Reuters)