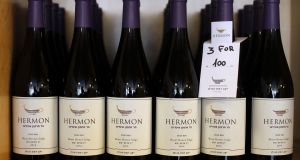 Wine bottles at a winery of the Israeli-annexed Golan Heights. The European Union have announced that goods from settlements –Jewish communities built in areas occupied by force in 1967 – must be specifically labelled, infuriating Israel.

Israel will reportedly summon Irish Ambassador Alison Kelly to its foreign ministry in Jerusalem for a reprimand over Ireland’s support for EU labelling of goods from the West Bank.

The Yediot Aharonot newspaper says the ambassador will be told that meetings she plans for herself or visiting Irish officials will be restricted to low-tier diplomats.

This is part of Israel’s diplomatic response to last week’s European Union decision to label Israeli goods made beyond the 1967 Green Line border. Measures are to be taken against all 16 EU member states, including Ireland, which urged the EU to adopt labelling.

In addition, Israel will reassess the involvement of the EU in the peace process; examine support for EU projects in Gaza and the West Bank, restricting entry permits for EU delegations; and limit dialogue with the EU.

Prime minister Binyamin Netanyahu has been relentless in his criticism of the European move.

“This is absolutely absurd. It’s morally abhorrent . . . I’d expect Europe not to adopt this heinous act which has such horrible historic overtones,” he said yesterday.

European Union ambassador to Israel Lars Faabog-Andersen hit back against comparisons with the Nazi boycott of Jewish businesses.

“ In my mind this is a distortion of history and belittlement of the crimes of the Nazis, and the memory of their victims.”