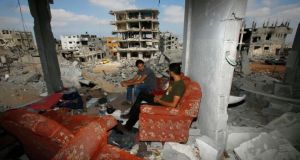 Palestinians sit on a couch in the remains of their home in the east of Gaza City on Wednesday, which witnesses said was destroyed in an Israeli offensive after a ceasefire was declared. Photograph: Suhaib Sale/Reuters

Deputy chief of Hamas politburo Ismail Haniyeh emerged from hiding on Wednesday to address a rally of thousands of cheering and flag-waving supporters, as the Egyptian mediated ceasefire between Palestinians and Israel took hold.

With Gaza’s skies empty of Israeli warplanes and drones, displaced Gazans left UN schools and other shelters to visit homes and workplaces to assess damage inflicted by the conflict.

De-miners collected unexploded ordnance, while men and boys cleared rubble from destroyed and damaged buildings. Fishermen cast their nets off the coast for the first time since a five-day truce collapsed a week ago and sailed their boats six nautical miles from the coast, twice the distance previously permitted by Israel.

The West Bank-based Palestinian ministry of health has dispatched lorry-loads of medicines, as well as four dermatologists, to treat the displaced people.

The World Food Programme (WFP) delivered urgently-needed supplies in the first UN convoy in eight years to access Gaza through the Rafah crossing on the border with Egypt. Lorries delivered 15,600 food parcels, enough to feed 150,000 people for five or six days. Another 10,000 parcels are awaiting shipment.

“The opening of the Rafah crossing for humanitarian aid provides a major opportunity to scale up . . . delivery to Gaza and needs to be sustained,” said WFP country director Pabli Recalde. The WFP needed to accelerate the volume and speed of deliveries which have to reach half a million people, he added.

The UN Relief and Works Agency (Unrwa) has issued an emergency appeal for $295million to support half-a-million displaced Gazans, including 300,000 staying in 85 agency schools. Unrwa said that intense violence during the last week of hostilities had been particularly devastating and left people with nowhere to go.

Unrwa estimated more than 20,000 homes are “ uninhabitable” and the school year, due to begin last week, has been postponed indefinitely

In its daily brief, Human Rights Watch said now the ceasefire was in place, “the question turns to issues of justice for the crimes committed in the 50- day conflict and beyond. Palestinian leaders [including Hamas chief Khaled Mishaal] have been considering signing up to the International Criminal Court, which would then have jurisdiction for war crimes and crimes against humanity committed by any party on or from Palestinian territory. Rights groups argue that they should stop hesitating and join”.

The team consists of William Schabas, head of the Irish Centre for Human Rights, NUI, Galway; Doudou Diene of Senegal; and Mary McGowan Davis of the US.

As the US, Britain, France, Germany and Jordan continued consultations on the text of a UN Security Council resolution intended to bolster the ceasefire, quartet envoy Tony Blair said: “The quartet will . . . concentrate on a long-term plan for Gaza and for its reconstruction [involving its] reconnection to the outside world under the authority of the Palestinian Authority government.