Four British fighter jets left a British military base in Cyprus a few hours after a vote in parliament approved extending action against Islamic State to Syria. Video: Reuters 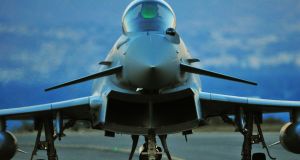 An RAF Typhoon arrives at RAF Akrotiri in Cyprus to begin operations against Islamic State targets in Syria. Photograph: PA 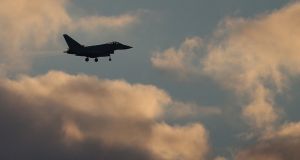 Britain’s first air strikes in Syria targeted oil fields in the eastern Syrian desert that have been controlled for more than a year by Islamic State.

Michael Fallon, the secretary of state for defence, said the overnight strikes had hit the al-Omar oil field, while activists in the province of Deir Ezzor reported other coalition strikes on the al-Jafra and al-Tanak oil fields, as well as the Conoco gas processing plant, in some of the most intense bombings of Isis facilities in the area over the past year.

Islamic State, also known as Isis, seized the oil fields, Syria’s largest, during its surge into Iraq last summer. It controls most of Deir Ezzor, and its southeastern border has long been a crucial crossing point for militants entering Iraq, now and during the US occupation.

“Whether it [the bombing] has an effect or not will emerge in the next few days,” said an activist with Deir Ezzor is Being Slaughtered Silently, a group documenting Isis crimes and life in the embattled province, operating clandestinely. “But yesterday was very violent as it targeted anything that has to do with Daesh [Isis] and oil.”

In targeting the oil fields, Britain appeared to have sidestepped questions about potential civilian casualties from its air campaign, while seeking to disrupt a crucial source of revenue for the group.

Isis is believed to be profiting from the sale of black market oil to outside buyers as well as those in Iraq and Syria.

The coalition has begun in recent months to intensify air strikes against the Isis oil trade. Late last month the US said it had targeted 283 Isis vehicles and an oil facility.

Reaction inside Syria to Britain joining the air campaign has been mixed. While some in areas controlled by Isis said they supported any military action against the group, others said it would do little to stem the power of the jihadi without a broader strategy to address the crisis in Syria, and in particular to end the violence perpetrated by the regime of the Syrian president, Bashar al-Assad.

“Isis is our enemy just as the Syrian regime is our enemy,” said Issam al-Reis, the spokesman for the Southern Front, a coalition of moderate opposition forces fighting the Assad regime in the country’s south. “Both brutally repress and kill the Syrian people. While it is positive the UK is taking more measures to attack them what is important to understand is that a strategy to tackle Isis without tackling the causes of Isis will fail.”

However, an activist collective that operates secretly in Raqqa, the capital of Isis’s self-proclaimed caliphate, and which opposes both Isis and the Assad regime, condemned the air strikes, saying Britain should accept more refugees if it wished to help Syrians.

“Just bombing Isis in Raqqa from the sky will not defeat Isis but it will make people suffer more,” the group Raqqa Is Being Slaughtered Silently said in a series of tweets.

“Isis will use UK strikes to recruit new people in the west and new fighters.”

“The strange thing is all the world wants to fight Isis but not even one country dare to send one soldier to fight Isis on the ground.” – (Guardian service)