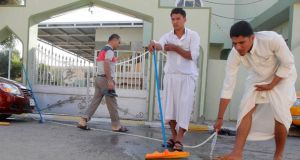 A bomb has ripped through a crowd of Sunni worshippers coming out of a mosque in northern Iraq after prayers at the start of a major Muslim holiday, killing 12 people and wounding 24.

The attack took place in the oil-rich city of Kirkuk, 180 miles north of Baghdad, as worshippers were leaving the al-Qodus mosque after morning prayers for the beginning of the Eid holiday.

Kirkuk provincial police chief General Jamal Tahir Bakir said security had been stepped up, especially on the entrances to the city.

“Our security forces have taken all the necessary measures within our capabilities to protect the people during Eid, but unfortunately, terrorists were able to penetrate the city and strike innocent people once again,” he said.

Kirkuk, a frequent flashpoint for violence, is home to an ethnic mix of Arabs, Kurds and Turkomen who all have competing claims to it.

More than 5,000 people have been killed in Iraq since al-Qaeda and other militants stepped up attacks following a security crackdown against a Sunni protest camp in April.

The surge has sparked fears that the country could see a new round of widespread sectarian bloodshed similar to that which brought it to the edge of civil war in 2006 and 2007.

Much of the violence is the work of the local al-Qaeda branch, a Sunni extremist group, which frequently carries out attacks against Shiites and those seen as linked to the Shia-led government.

But several Sunni mosques have also been targeted in recent months and while it is possible that Sunni insurgents could be behind attacks on Sunni mosques in hopes of stoking sectarian hatred, Shia militias that have begun remobilising across Iraq may also be behind such assaults.

The attack came despite tight security measures imposed by security forces ahead of the four-day Eid celebrations.

Eid commemorates the readiness of the Prophet Ibrahim, known to Christians and Jews as Abraham, to sacrifice his son, Ismail, on God’s command.