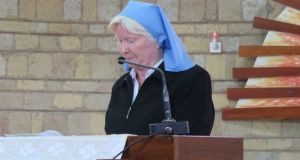 Sr Mary Killeen: ‘For people trying to climb out of poverty, eviction reduces them to dependence and destitution.’

An Irish nun working with the poorest people living in slums in Kenya, was chosen to address Pope Francis on his visit there on Friday.

Sr Mary Killeen, from Phibsborough in Dublin, told the pontiff of the fight to provide education, health and welfare to a community oppressed by deep-seated corruption and “land-grabbers”.

“I don’t know who put my name forward but I found myself told that I would be the one to welcome the pope,” she told The Irish Times.

Pope Francis visited the slum of Kangemi on the outskirts of the capital Nairobi, where he watched a short video of children wading waist-deep through rubbish.

In her address, which had been submitted to the Vatican in advance of the visit, Sr Mary told the pope that evictions of slum dwellers take place “in a very cruel manner”.

“People are forced out of their homes during the night. They save their children but lose everything else. Children are forced to drop out of school. For people trying to climb out of poverty, eviction reduces them to dependence and destitution.”

Corruption was a “huge problem” in Nairobi slums – “a hundred times worse than in middle class society”, she said. Sexual, physical and emotional abuse and child-trafficking were also major issues.

“Slum dwellers have to pay more for transport, education, health, all types of services. They cannot afford to. They are then imprisoned when they cannot pay fines and bribes. Poor people are further impoverished by corruption.”

Cheap alcohol was also an issue and hundreds died each year from drinking homemade alcohol. Others were left blind or suffered strokes.

“An even greater problem is man-made floods, caused by ‘land-grabbers’. These powerful people dump soil along the banks of the river to create new land which they sell. This causes devastating floods. Environmental, national and county laws are ignored,” Sr Mary said in her address.

The Irish nun is director of the Mukuru Promotion Centre, established in the area of Mukuru by the Sisters of Mercy in 1985.

The organisation started as a temporary primary school in the heart of the Mukuru slums and its key objective then was to provide education to local children “to give them hope for a brighter future”.

It has since expanded to provide education, health and welfare services to a community of about 600,000 people, with four primary schools and a secondary school.

Sr Mary and the Sisters of Mercy are tied up in an ongoing court battle with developers who are seeking to take away a playground that serves 5,000 children in Mukuru.

It is a “beautiful” playground in slums where land is scarce and she does not plan to let it go easily.

“I’m getting old now, but as long as I’m here, the kids are going to play on it.”

Sr Mary said she had also been threatened in the course of her work. “You get targeted and you get people threatening you,” she says. But she tells them: “If you kill me, then people will hear about it and you will do my cause a lot of good. “I turned 70 recently and everybody has got to die some time.”