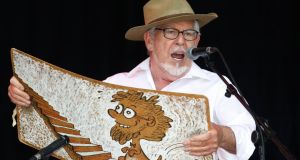 Australian entertainer Rolf Harris performs in June 2010 at the Glastonbury Festival. Harris has been charged with 13 child sex offences, the latest in a series of high-profile celebrities from the 1970s and 1980s. Photograph: Luke MacGregor/Reuters

Rolf Harris has been charged with 13 offences under Operation Yewtree, including nine counts of indecent assault and four counts of making indecent images of a child in 2012.

Alison Saunders, chief crown prosecutor for CPS London, said: “We have carefully considered the evidence gathered by the Metropolitan police service as part of Operation Yewtree in relation to Rolf Harris, who was initially arrested on 29 November 2012 over allegations of sexual offences. A file of evidence was passed to the CPS on 12 August 2013.

“Having completed our review, we have concluded there is sufficient evidence and it is in the public interest for Mr Harris to be charged with nine counts of indecent assault and four of making indecent images of a child. The alleged indecent assaults date from 1980 to 1986 and relate to two complainants aged 14 and 15 at the time of the alleged offending.

“The decision has been taken in accordance with the code for crown prosecutors and the DPP’s interim guidelines on prosecuting cases of child sexual abuse. We have determined that there is sufficient evidence for a realistic prospect of conviction and that a prosecution is in the public interest.”

Harris, who will appear at Westminster magistrates court on September 23rd, was interviewed under caution last November under the investigation into alleged sexual offences by Jimmy Savile and others. He was then arrested in March and bailed pending further inquiries.– (Guardian service)