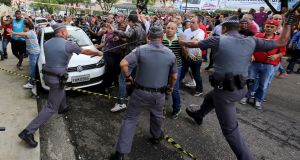 He was picked up at his home in the suburbs of São Paulo at 6am and brought to a federal police station in the city for an interview that lasted about three hours. This was the most dramatic development yet in the two-year probe that has left Brazil’s political class paralysed and is threatening to unseat his hand-picked successor, Dilma Rousseff. The country’s most powerful politician, Lula has not been formally arrested or charged but was brought in for “coercive” questioning by order of Sérgio Moro, the federal judge leading the investigation.

In authorising the move, Moro wrote that while Lula “merits every respect in virtue of the position he occupied . . . this does not mean he is immune from investigation”.

In a statement, the taskforce at Brazil’s federal prosecution service that is leading the probe identified the former president as “one of the principal beneficiaries of the crimes” committed within Petrobras.

It said the corruption scheme was used to fund his ruling Workers’ Party and its election campaigns and that Lula also personally sought to benefit from it in the form of a luxury country estate and a beachfront triplex apartment.

Also under investigation are Lula’s wife, Marisa, three of his sons, one daughter-in-law and Paulo Okamotto, president of the Instituto Lula, which was founded after the former president left office in 2011.

In a press conference afterwards at his party’s headquarters, a defiant Lula criticised the actions of investigators.

“None of this will diminish my honour,” he said. “On the contrary, they have lit a flame in me that the struggle will continue.”

Outside, party militants shouted “there will be no coup”, referring to Lula’s claim that the investigation is a “farce” designed to topple the Workers’ Party government. Earlier in the day there had been scuffles in the city between supporters and opponents of the former president.

Brazil’s currency and stocks rallied on the news, as investors bet that Lula’s questioning increased the chances that President Rousseff would be forced from office. Her economic policies are widely blamed for the country’s worst recession since the Great Depression.

Yesterday’s events rounded off the most volatile week yet in the two-year probe that has already seen dozens of former Petrobras executives, leading members of the country’s business community and senior political figures charged with involvement in a scheme that illegally siphoned billions out of the country’s biggest company. Many have been convicted.

On Thursday the country’s supreme court voted unanimously that Eduardo Cunha, the speaker of the lower house of congress, should stand trial before it over accusations that he took $5 million (€4.5 million) in bribes from Petrobras contractors.

Former Petrobras executive signs plea-bargain agreement in which he explains how the scheme operated in return for a lighter sentence.

Executives from leading Brazilian corporations that supply Petrobras charged with involvement in scheme. Many agree plea-bargains.

Supreme court opens investigation into involvement of heads of senate and lower house of congress and 32 other sitting politicians.

Workers’ Party treasurer arrested over involvement in scheme, raising doubts over the legality of President Dilma Rousseff’s election campaigns in 2010 and 2014.

Senior Workers’ Party official José Dirceu, who served as Lula’s first chief of staff, arrested over his role in the scheme.