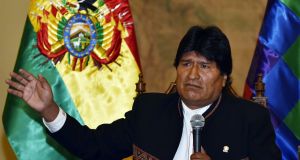 Bolivia’s president Evo Morales answers questions from the press in La Paz on Monday a day after Bolivians appear to have rejected his bid to seek a fourth term in office. Photograph: Aizar Raldes/AFP/Getty Images

Bolivia’s president Evo Morales looks set to suffer his first significant electoral reversal after a decade in power as voters appeared to reject a proposal to allow him run for a fourth term in office.

Partial results from a referendum held on Sunday point to a clear margin of victory for the No campaign, meaning Morales (56) now faces having to stand down in early 2020 after voters rejected his request to be allowed run again in the 2019 presidential election.

With 72.5 per cent of the votes surveyed the No campaign had won 56.5 per cent versus just 43.2 per cent for their opponents, according to the country’s electoral court. Despite the official numbers, state media continued into Monday to report a Mori exit poll that showed a much closer result with No on 51.4 per cent and Yes on 47 per cent, while claiming that traditionally pro-Morales rural regions still had to report.

The surprisingly large lead carved out by the No campaign follows accusations aired the week before the vote that Mr Morales, the country’s first indigenous leader, had used his position to help further the business career of his former lover.

Despite overseeing steady economic growth and a large drop in poverty since being first sworn into office in 2006 there has been rising discontent in what remains one of Latin America’s poorest societies at mounting evidence of widespread official corruption. All Bolivia’s big cities rejected the proposal.

Defeat will present a major challenge to Mr Morales’ Movement Towards Socialism (Mas) party. It lacks another leader with the president’s charisma and electoral appeal among the country’s indigenous majority.

The failure to prepare a new generation of leaders partially explains the party’s efforts to push through a second change to the constitution it drew up in 2009 in order to try to allow Mr Morales run for a fourth term, which would have seen him remaining president until 2025, when the country celebrates the bicentenary of its independence from Spain.

In a press conference on Monday morning Mr Morales refused to concede defeat, saying he was awaiting the final results, claiming that in previous elections the Mas vote always increased as the count progressed. He also criticised the use of social media during the campaign. Photographs of his former lover’s mansion were widely circulated online in the days ahead of the vote.

But he told assembled media he was calm about the possibility of losing. “If the No vote wins life will go on, the struggle will go on,” he said. The president also said “there are many leaders” within Mas, which would debate with the country’s social movements who should succeed him “at the appropriate time”.

A congressional commission set up to investigate the corruption allegations involving the president is set to start work on Tuesday.