Wrestling with radical Islam is an uphill battle in France 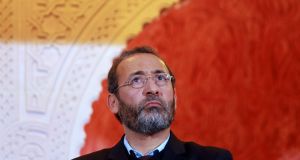 The rector of the mosque of Bordeaux, Tareq Oubrou, looks on during a speech by the French interior minister in February. Getty Images

French authorities are counting on the country’s Muslim establishment to combat extremism in their community.

In a speech to the National Assembly following attacks that killed 17 people at Charlie Hebdo and a kosher supermarket in January, prime minister Manuel Valls said “tolerant, univeral Islam” must be prevented from tipping into “obscurantism and the temptation of jihad”.

The debate, Valls said, “is not between Islam and society. It is a debate that the Islam of France must have within itself, relying on religious leaders, theologians and intellectuals”.

Tareq Oubrou is exactly the sort of person whom Valls had in mind. The Moroccan-born rector of France’s largest mosque, in Bordeaux, and former president of the Association of Imams of France, wears an elegant suit and tie and uses words like “acculturation”, “hermeneutics” and “ontology” in conversation. When he was interior minister, Valls made Oubrou a chevalier de la Légion d’honneur.

Oubrou’s sermons on the need for French Muslims to adapt to their secular surroundings are music to French ears. When the latest outrages occurred, Oubrou was the first Muslim leader to call on his co-religionists to “go massively into the streets to express their disgust”. It was time, Oubrou added, for Muslims to shed their “I don’t need to justify myself complex”.

The French, Oubrou says, “want diversity but on condition that others resemble them”. In contrast with the US, where immigrants are seen as a component of the nation, in France “the immigrant must assimilate, disappear”.

Radical youths feel excluded from French society and want to reclaim what they see as their Arab Muslim identity. Oubrou says that, on the contrary, they must “get rid of these social, anthropological envelopes, retain a spiritual dimension that survives in the west, like other religions . . . When one’s culture changes, one’s relationship with religion must change. The culture of French Muslims is western. Europe is the most secular continent in the world and France is the most secular country in Europe.” It’s an uphill battle, Oubrou admits . “We’ve launched a lot of slogans for a republican Islam but we’ve failed at translating these slogans into reality.”

Asked whether France should forbid foreign contributions to Muslim institutions, as Austria has done, Oubrou asks: “Then how are we going to build mosques? I accept money from Saudi Arabia, from Israel, on condition there are no strings attached.”

Oubrou’s response to a question regarding the infiltration of mosques by French intelligence services is equally provocative. “It’s a good thing,” he says. “It reassures me. I like being spied on. The renseignements généraux need to do their job. I always tell Muslims the mosque is French territory. The mosque must be transparent.”

Everyone passes the buck in France’s battle with radical Islam. The government wants Muslim leaders to confront the problem. Oubrou blames French media, the education system and mayors who build mosques “to get the Muslim vote” but ignore what is preached there. “Exaggeration by mass media sometimes gives the impression that violence is the violence we see,” Oubrou says. “Other forms of violence deeply undermine our world. Famine kills more people than terrorism.”

Oubrou also relativises salafism, the fundamentalist strand of Islam practised by Islamic State and al-Qaeda, dismissing it as “nostalgia for the past” and “literalism void of meaning, the practice of appearance . . . a trend, a fashion. I’m sorry about it, but it doesn’t worry me.”

Oubrou dismissed Islamic State as “a joke . . . criminals . . . terrorist mercenaries . . . There’s not even a Palestinian state, and people talk about ‘Islamic State’,” he said, laughing.

In the meantime, France’s immigrant banlieues fester and the radical imams whom Oubrou describes as “bandits, gang leaders” make converts. The flow of would-be jihadis to Syria continues.