Women in Cologne celebrate carnival with fear and defiance 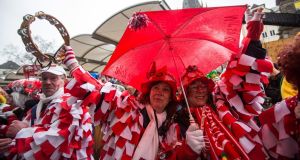 People in costume celebrate carnival in Cologne on Thursday. The city is spending close to €500,000 on police, paramedics and new equipment after the sexual assults suffered by women on New Year’s Eve. Photograph: Maja Hitij/EPA

Cologne’s women have donned their costumes and put on their face paint for the annual four-day carnival festivities on the Rhine, but their celebratory mood this year is tinged with fear and defiance.

A month after mass physical and sexual assaults around the main train station, city police have promised a huge presence and new security measures to prevent a repeat of the shocking events of New Year’s Eve that went around the world.

“We Rhinelanders don’t let ourselves be scared so easily, certainly not by a bunch of idiots,” said Kathrin Eggers, dressed up as a clown with a frizzy red wig.

On December 31st hundreds of young women gathered to celebrate the new year reported being surrounded by groups of men of “north African appearance”. Many were groped or pickpocketed and, in some cases, raped.

The aftermath of the attack started an emotional debate about Germany’s asylum crisis, which brought more than one million people to Germany last year. The slow response of police to the attacks cost the city’s police chief his job; his successor, Jürgen Mathies, has promised his force will take action to prevent a repeat of New Year’s Eve.

“The global public will be watching very closely to see how Cologne manages this challenge,” he said.

Cologne’s mayor, Henriette Reker, is also under pressure to make a success of this year’s carnival: four days of pre-Lenten drinking, dancing, costumes and music on the banks of the Rhine.

“Everyone should be able to celebrate carnival in Cologne without danger,” said Ms Reker, mocked after the attacks for suggesting women should stay safe by keeping an arm’s length from strangers.

Until then 2,500 police officers will be on duty round the clock – double the number deployed at last year’s festivities. The city is spending close to €500,000 on police, paramedics and new equipment, including mobile floodlights, and a “women’s security point” at the cathedral with police and counsellors.

With revellers downing a large lake of Kölsch beer between now until Monday, police warn that they cannot guarantee 100 per cent security. Each year’s carnival ends with about 50 reports of physical and sexual violence, they say, up to and including rape.

The carnival festival has its roots in the ancient Greek and Roman spring festivals and was later adopted by Christians as a last celebration before Lent (carne vale means “farewell to meat”). The celebrations are almost as old as Cologne, Germany’s largest Catholic metropole, while the organised festivities have been held annually since 1823.

As the so-called “fifth season” reaches its climax in the coming days, police say they have identified about 44 suspects from the New Year’s assaults. The vast majority are young men from Morocco and Algeria, though just nine have been found and placed in custody.

Investigators are still studying some 355 hours of security camera and private mobile phone footage in the hope of linking further faces to attacks.

With the investigation still ongoing, many Cologne women donned their carnival costumes with mixed feelings this year.

“We thought long and hard before we headed to the old town, and I have a bit of a knot in my stomach,” said local woman Susanna to WDR radio, “but I feel secure, I’ve done a self-defence course, and carnival comes only once a year.”

1 Coronavirus: House parties a ‘disaster’ for containment efforts
2 Gardaí disperse crowds gathered at coastal beauty spots
3 Six counties free of new cases of Covid-19 over past week
4 How lockdown has helped us to save money - and find new ways to spend it
5 George Floyd death: Man shot and killed by law enforcement in Kentucky
Real news has value SUBSCRIBE