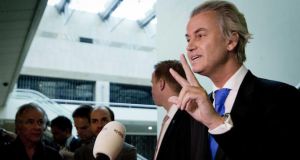 Has Geert Wilders finally gone a step too far? That’s the question that has riveted the Netherlands since the right-wing leader led a crowd of supporters in an anti-Moroccan chant – which could yet lead to him being charged with incitement to hatred for a second time.

The act was repulsive but its context was instructive: it was the day of the Dutch local elections, in which Wilders’s Freedom Party ran only two candidates, apparently saving its powder for the European elections in May.

One candidate ran in The Hague, the other in Almere, locations where Wilders expected a boost that would allow him to give his customary two fingers to the “establishment parties”, Mark Rutte’s Liberals and their junior coalition partners, Labour – both due for a midterm drubbing.


Unexpected hammering
That’s not quite how it turned out, however. Yes, the government parties were trounced. But Wilders got an unexpected hammering too. His share of the vote fell by 2.6 per cent in The Hague and 1 per cent in Almere, victim of a resurgent centre-left D66 and a host of local-issue candidates.

So, shortly after the polls closed, when Wilders emerged on to the public platform in Almere, to a pounding Eye of the Tiger , he didn’t exactly look like the giant-killer he so loves to play.

What happened was that, in a bid to rouse the crowd, Wilders turned to a reliable old bogeyman, Moroccan immigrants – particularly those between 12 and 24, who can be shown statistically to be responsible for a disproportionately high share of crime in parts of the country.

“Do you want more or fewer Moroccans in your city and in the Netherlands”, Mr Wilders roared to the crowd? “Fewer, fewer, fewer”, they roared in return.

To the delight of the crowd and the amazement of watching journalists, this went on for several minutes until finally, with a slight smile, Wilders leaned to the microphone and said: “Then we’re going to organise it.”

That may turn out to have been the worst mistake the Freedom Party leader has ever made. The Dutch hate to appear intolerant, even about intolerance, and so attacking Wilders, even as a political opponent is always a delicate operation. Not this time, however. Broadcaster RTL took the unprecedented step of publishing an editorial saying Wilders “should be deeply ashamed” and warning his performance would invite comparisons with Hitler and revive memories of the Dutch deportation of 110,000 Jews during the second World War.

This was a theme taken up by BNR Radio News editor in chief Sjors Frohlich, who said that in the past he had always dismissed comparisons between Wilders and Hitler.

“But after last night, I finally at least understand where the people who make that comparison are coming from. Especially since it’s clear that Wilders was consciously and deliberately manipulating his audience.”


‘Crossed his own boundary’
De Volkskrant , a daily newspaper, noted that this was the first time Wilders had referred to a specific nationality rather than to “Muslims”. Its editorial commented: “Wilders has now crossed his own boundary. Until now he has always managed to balance on the dividing line between what is and what is not discrimination in the eyes of the law.”

Remarkably, even right- wing popular daily De Telegraf blasted: “Those who place themselves outside the constitution by consciously turning their political message into the sort of deeply menacing politics that we saw off in the past will find themselves sidelined by society.”

Taking that cue, prime minister Mark Rutte reassured young Moroccans last week: “You will not be deported”; and said his party would not work with Wilders or the Freedom Party until he apologised for the chanting – something he has absolutely refused to do.

Instead Wilders – who launched his anti-EU European election manifesto by email at the weekend – maintained: “I spoke the truth. I said nothing wrong. I am not sorry and I am not going to apologise for anything.”

Stubbornness might have been a viable strategy if Wilders’s own people were going to back him to the hilt – but that is not what has happened. So far, two MPs, one MEP and a handful of local and provincial councillors have angrily broken their ties with the party.

In the Netherlands today, two damning questions are being asked about Wilders: “Can we now openly call him a racist?” And: “Has he needlessly blown his chances in the European elections – and, with them, his grand plan for a pan-European right-wing alliance?”