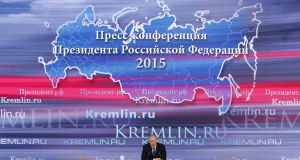 Russian president Vladimir Putin has crudely rebuffed talk of a rapprochement with Turkey and given a first veiled admission that Moscow’s operatives have been deployed to the conflict zone in eastern Ukraine.

Ahead of international talks on the Syrian crisis in New York on Friday, Mr Putin said Moscow’s plan to resolve it “broadly coincides” with that of Washington. But he made clear there was no end in sight to Russian air strikes in support of forces loyal to president Bashar al-Assad.

One pilot was killed and another Russian serviceman died in a failed rescue attempt.

Denouncing Turkey’s behaviour as “an act of enmity”, Mr Putin declared: “It’s hard, or practically impossible, for us to reach agreement with Turkey’s current leadership.”

“What have they achieved? Maybe they thought we’d run away from there, but Russia is not that kind of country,” Mr Putin added, noting how Moscow had bolstered air defences in Syria after the incident.

Asked whether a “third country” might have provoked the Turkish strike on Russia’s warplane, Mr Putin said he “got the hint” from his questioner.

“I don’t know if someone in the Turkish leadership decided to lick the Americans in a particular place, or if they acted properly or not,” Mr Putin said, to giggles and applause from some Russia reporters in the audience.

Mr Putin said Russia’s plan to resolve Syria’s crisis “broadly coincides” with US views. But he gave no details, and rejected calls for Mr Assad to be barred from talks on Syria’s future.

He insisted that Russia would “continue launching air strikes and supporting . . . the Syrian army as long as the Syrian army conducts these operations.” In what some analysts saw as a key comment, he also suggested the Syrian campaign served as good, relatively cheap training for Moscow’s military.

“We are just conducting separate operations, using our air forces, air defence, intelligence,” Mr Putin said. “This is not a serious burden for the budget . . . It’s hard to imagine a better exercise. So we can train there for a long time without any serious harm to our budget.”

When a Ukrainian journalist sarcastically passed on greetings from two alleged Russian military intelligence officers who are on trial in Kiev, Mr Putin made a first, thinly veiled admission that he had sent operatives to eastern Ukraine, where the US, Nato and EU say Moscow provides vital help to pro-Kremlin separatists.

“We never said that there aren’t people there dealing with certain issues, including in the military sphere. But it doesn’t mean regular Russian troops are there – be aware of the difference,” Mr Putin said, in comments that recalled the way he dismissed, and later confirmed, that Russian forces annexed Crimea last year.

The president batted away questions on everything from Russia’s ailing economy to rampant corruption and media efforts to identify his two mysterious daughters.

In other comments, Mr Putin said Mr Blatter – the Fifa chief suspended amid a wide- ranging corruption probe into football’s governing body – deserved a Nobel Prize for “always trying to treat football not as sport but an element of co-operation between countries and peoples.”

“He says that he wants a different level of relations, tighter and deeper relations with Russia,” Mr Putin added. “How can we not welcome that? Of course we welcome it.”