Violent clashes in Greek refugee camps ahead of deportations

Rights groups have described EU-Turkey plan as illegal and inhumane 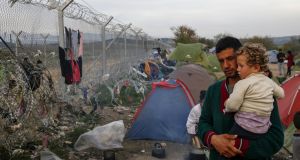 A man with a child looks at the border fence at a makeshift camp for migrants and refugees at the Greek-Macedonian border near the village of Idomeni, Greece. Photograph: Marko Djurica/Reuters

Violent clashes erupted in Greek refugee camps among panicked migrants as Greece and the European Union pressed ahead on Friday with their intention to deport thousands back to Turkey. Rights groups and UN relief officials have described the plan as illegal and inhumane.

Hundreds of migrants broke out of an overcrowded detention centre on the Greek island of Chios where they were being held and began walking to the port to protest a European Union deal that went into effect last month, authorizing Greece to return them to Turkey if their applications for asylum in Europe were not accepted. The deportations officially begin Monday.

Video clips in the Greek media showed migrants streaming away from the camp unhindered by the police hours after a brawl broke out at the camp’s registration centre.

Several refugees were taken to a hospital after riot police used stun grenades and a help centre run by Doctors Without Borders was destroyed, forcing the group to abandon its work. More than 1,500 migrants were being held at the centre, designed for 1,200.

Three people were also reported stabbed during a migrant riot on the island of Samos, where another detention facility operates.

Major humanitarian groups, including Doctors Without Borders, the UN refugee agency and the International Rescue Committee recently suspended some of the work at detention centres to protest the European Union deal, which they say violates international law.

The groups cited deteriorating conditions at migrant camps, including a makeshift camp in the northern Greek border town of Idomeni, where more than 12,000 migrants have settled in squalor since Europe’s borders closed last month, and in Piraeus, the port city near Athens, where nearly 6,000 migrants are living roughly in tents and warehouses.

In Geneva, the refugee agency warned on Friday that neither Greece nor Turkey were ready to handle mass returns of migrants, and said both countries needed to provide further protections for asylum seekers before undertaking deportations. Citing what it called “continued serious gaps” in preparations, the agency released a nine-page document detailing the conditions that it said must be satisfied.

Amnesty International, which has fiercely opposed the deal, said that it had proof that Turkey was not a safe country for refugees. In a scathing report, it accused Ankara of forcing hundreds of Syrian asylum seekers back to their war-torn country, contravening human rights procedures.

One the strongest criticisms of the agreement came from Amnesty International, the London-based rights group, which claimed to have proof that Turkey was not safe for refugees. In a new report released 72 hours before the deportations were to begin, Amnesty accused the Turkish government of forcing hundreds of Syrian asylum seekers back to their war-torn country in recent months, contravening human rights procedures.

Criticism of the impending deportations came against a backdrop of consternation over the lengths European leaders have been willing to go to keep migrants away including offering billions in aid to Turkey to conclude the agreement, while ignoring an increasingly harsh crackdown on president Recep Tayyip Erdogan’s opponents by the Turkish authorities.

“EU leaders have wilfully ignored the simplest of facts: Turkey is not a safe country for Syrian refugees and is getting less safe by the day,” Amnesty’s director for Europe and Central Asia, John Dalhuisen, said in the report.

Greece’s parliament nonetheless scrambled Friday to get a legal framework in place before Monday to carry out its end of the European Union deal. In a hurried session, lawmakers were expected to support draft legislation to allow returns to begin Monday, most likely from the Greek island of Lesbos, where large numbers of Afghan and Pakistani migrants have been held since the bloc signed the accord with Turkey.

More than 50,000 other migrants who are stuck on the Greek mainland remain in limbo about their future, but are growing restless ahead of the deportation scheme. On Wednesday, around 300 migrants, mostly Afghans and Syrians, engaged in the several violent clashes in the Piraeus port, where many have been holed up since Macedonia and other northern countries closed their borders, cutting off Europe’s main gateway to Germany, the migrants’ preferred destination.

In Idomeni, two migrants set themselves on fire this week to protest the border closures after being stuck in the camp for nearly a month. Hundreds of migrants there have joined the growing protests, chanting “Open the border!” and refusing to take buses to official military-run camps nearby out of fear they could be deported to Turkey.