An excavation is underway of what may be the largest mass grave of ethnic cleansing victims in Bosnia, a site whose existence was known for years but exact location covered up by a Serb wall of silence, Bosnia's Missing Persons Office said. 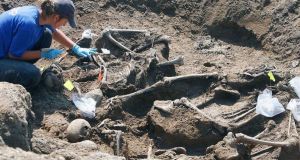 A 2010 file photo of forensic experts uncovering the remains of people killed during the Bosnian war, on the shore of lake Perucac near Visegrad. Photograph: Danilo Krstanovic /Reuters

Two decades after Serb soldiers carried out house-to-house searches in a campaign of ethnic killings in Bosnia, forensic scientists are digging up what could turn out to be the largest mass grave from the 1992-95 war.

So far, the remains of 360 people have been found at the Tomasica mass grave discovered in September near the northern town of Prijedor, far more than expected, authorities said today. The number is expected to rise and could one day surpass the 629 bodies found at Crni Vrh in Srebrenica.

The Missing Persons’ Institute said the Tomasica grave is linked to a secondary one found in 2003 about 10km away, where 373 bodies were extracted. Authorities believe the perpetrators of the killings moved parts of the remains from one grave to the other in a bid to hide the crime. In some cases, remains from the same person have been found in both graves.

Institute official Mujo Begic said he expects more remains to be found at the Tomasica site, and the bodies are of Bosniak and Croat men, women and children killed in their villages during the war.

“Together with the relocated ones, the number of the bodies here indicates the biggest mass grave so far found in Bosnia,” Mr Begic said. “We have found some identification documents in the grave, so we know who these people are.”

Tomasica is near Prijedor, which was a site of severe crimes against humanity committed by Christian Orthodox Serbs against Muslim Bosniaks and Catholic Croats. Many of the victims were killed in one of the three Nazi-style concentration camps Serb authorities had set up near Prijedor.

Authorities hope some of the 1,200 still missing from the area are now found in the Tomasica grave. The remains will be definitively identified through DNA matching from samples provided by living relatives.

Most of the victims were killed in their villages and brought to this location to be buried, but teams have also found bullets in the grave which indicates that some were brought here alive and that this was also an execution site, prosecutor Eldar Jahic said, citing evidence and witnesses.

Near the grave, Vahida Behlic (51) was sobbing as she watched forensic experts dressed in white uniforms and green rubber boots carefully lifting bones from the site, where skeletons were piled on top of each other. She came from Slovenia, where she has lived with her family since she escaped her native village of Zecovi, near Prijedor.

Mrs Behlic came with her husband and son because she thinks one of the skeletons could be of her mother Fatima who was 60 when Serb soldiers came, dragged her out of the basement and shot her in front of her house.

“I heard the story from a witness who survived because his own grandmother threw herself on him and covered him with her body,” she said.

A boy back then, the witness arrived in Slovenia injured but told her what he saw.“He said 32 people were killed that day. Standing here, I have the feeling they are watching us from down there.”