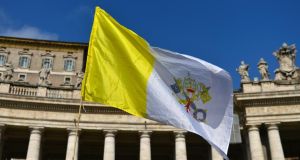 A Vatican flag in Rome. Today’s session in Geneva may produce some awkward moments for the Vatican delegation, which could be called on to answer specific questions about infamous sex abuse cases, including Irish ones. Photograph: Gabriel Bouys/AFP/Getty Images

A delegation from the Holy See is scheduled to appear before the UN Committee on the Rights of the Child in Geneva today.

The meeting of the committee – held to monitor implementation of the 1989 UN Convention for the Rights of the Child, signed by the Vatican in 1990 – follows one on November 25th last year.

Activist groups such as US-based SNAP, which campaigns on behalf of the victims of clerical sex abuse, have billed today’s meeting as a “historic event”. In reality, this may be a dull, technical hearing much concerned with the Vatican’s interpretation of its legal responsibilities in the worldwide clerical sex abuse crisis. One Vatican insider, speaking from Geneva yesterday, said: “Look, this is not a court, rather this is part of an ongoing dialogue which monitors how well various countries have implemented the original convention . . .”


Infamous cases
Nonetheless, today’s session may produce some awkward moments for the Vatican delegation, which could be called on to answer specific questions about infamous sex abuse cases, including Irish ones. The Vatican delegation will be led by Archbishop Silvano Tomasi, the Holy See’s permanent observer to the UN in Geneva, and it also includes Maltese archbishop Charles Scicluna, the man who until a year ago was the chief prosecutor at the Vatican’s Congregation for the Doctrine of the Faith (CDF).

Vatican sources yesterday confirmed that the Holy See will continue to claim it is “legally responsible” only for events that take place on Holy See territory. In other words, it cannot be held “legally” responsible for the actions or failings of all the 412,000 Catholic priests worldwide. The Holy See will continue to argue that the “legal” buck stops with the local church in question.


Canonical inquiries
As for CDF canonical inquiries into sex abuse cases, the delegation will argue that information from such inquiries is made available only to the relevant state investigative authorities and not to other bodies, UN or otherwise.

One thorny question that may emerge concerns the former Vatican nuncio in the Dominican Republic, Polish archbishop Jozef Wesolowski. Last August, he resigned as nuncio amid allegations of involvement in child abuse, returning immediately to Rome.

Earlier this month, Vatican senior spokesman Father Federico Lombardi confirmed that Archbishop Wesolowski is the subject of a CDF canonical investigation, adding that he may also face charges in a Vatican City “state” court.