Varoufakis defends his ‘plan B’ for Greece euro exit 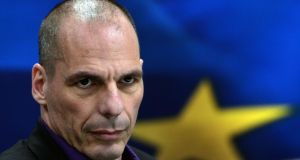 Greece’s former finance minister, Yanis Varoufakis, has been thrust back in the spotlight as he vigorously defended plans to launch a parallel payment system in the event of the country being ejected from the euro.

Saying it would have been “remiss” of him not to have had a “plan B” if negotiations with the country’s creditors had collapsed, the outspoken politician admitted that a small team under his control had devised a parallel payment system. The secret scheme would have eased the way to the return of the nation’s former currency, the drachma.

“Greece’s ministry of finance would have been remiss had it made no attempt to draw up contingency plans,” he said in a statement.

But Mr Varoufakis, who resigned this month to facilitate talks between Athens’s left-led government and its creditors, denied that the group had worked as a rogue element outside government policy or beyond the confines of the law.

Earlier yesterday, the Official Monetary and Financial Institutions Forum, which had organised a conference call between Mr Varoufakis and investors, released a recording of the conversation held between the former minister and financial professionals on July 16th.

Mr Varoufakis is heard saying that he ordered the ministry’s own software programme to be hacked so that online tax codes could be copied to “work out” how the payment system could be designed.

“We were planning to create, surreptitiously, reserve accounts attached to every tax file number, without telling anyone, just to have this system in a function under wraps,” he says, adding that he had appointed a childhood friend to help him carry out the plan. “We were ready to get the green light from the PM when the banks closed.”

The small centre-left Potami party said the scheme was “reminiscent of a bad thriller”. The main opposition New Democracy party demanded that the government “come up with convincing answers for the Greek people so that light can be shed on this dark narrative.”

Mr Varoufakis, who once proposed wiring up tourists in a bid to clamp down on tax evasion, denounced media accounts of skullduggery as far-fetched.

Separately, prime minister Alexis Tsipras, addressing Syriza’s governing parliamentary secretariat, threw down the gauntlet, challenging dissidents to come up with a better plan than the one he had been forced to accept to keep Greece in the euro. Rebels have refused to resign arguing they represent the true spirit of a party elevated into power to eradicate austerity. – (Guardian service)