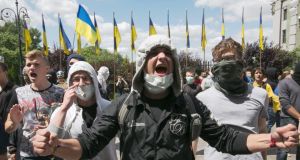 Russia’s foreign minister has accused the United States of encouraging Ukraine to challenge Moscow and heavily weighing in on the European Union.

Speaking in televised remarks, Sergei Lavrov said that “our American colleagues still prefer to push the Ukrainian leadership toward a confrontational path”.

He added that chances for settling the Ukrainian crisis would have been higher if it only depended on Russia and Europe.

Mr Lavrov spoke after the European Union summit which decided not to immediately impose new sanctions on Russia for destabilising eastern Ukraine, but gave the Russian government and pro-Russian insurgents there until Monday to take steps to improve the situation.

Ukraine yesterday signed a free-trade pact with the EU, the very deal that angered Russia and triggered the bloodshed and political convulsions of the past seven months that brought Russia-West relations to their lowest point since the Cold War times.

In November, under pressure from Moscow, a former Ukrainian president dumped the EU pact, fuelling huge protests that eventually drove him from power. Moscow responded by annexing the mainly Russian-speaking Crimean Peninsula in March, and pro-Russian separatists soon rose up in Ukraine’s eastern provinces.

The US and the EU slapped travel bans and asset freezes on members of Russian president Vladimir Putin’s inner circle and threatened to impose more crippling sanctions against entire sectors of Russia’s economy if the Kremlin fails to de-escalate the crisis.

The EU leaders gave Russia and the rebels until Monday to take steps to ease the violence, including releasing all captives, retreating from border checkpoints, agreeing on a way to verify the ceasefire and launching “substantial negotiations” on Ukrainian president Petro Poroshenko’s peace plan.

The week-long ceasefire, which both sides have been accused of violating, expired at 10pm local time, but Mr Poroshenko quickly declared its extension until 10pm local time Monday.

Ukrainian defence minister Mykhailo Koval was quoted by the Interfax news agency as saying that the situation in the east was largely quiet overnight and there were no casualties among Ukrainian troops despite sporadic shooting.

Mr Lavrov acknowledged that Russia has some leverage with the rebels, pointing at their move this week to release four observers from the OrganiSation for Security and Cooperation in Europe (OSCE) after weeks of captivity, but claimed that Moscow’s influence is limited.

“There are reasons to believe that they hear us on other aspects of Russian position regarding the crisis in Ukraine, but that doesn’t mean that they immediately move to heed our calls,” he said.

Four other OSCE observers are still being held, but a leader of the insurgents promised yesterday to free them “in the nearest days”.

Following talks with a troika including a former Ukrainian president who represented the Kiev government, the Russian ambassador and an OSCE envoy, rebel leader Alexander Borodai also promised to abide by the extended ceasefire.

He rejected the EU leaders’ demand to retreat from three checkpoints on the border with Russia captured by the rebels, but invited the OSCE to send its monitors to the border crossings and any other areas in the east.