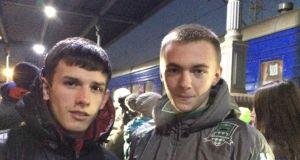 Two boys being evacuated from kharki, eastern Ukraiine. In Odessa volunteers were waiting to take them to a sanatorium where they are expected to stay for at least two months

It was already dark and well below zero when the bus pulled up outside Kharkiv train station. The children filed out and formed a line on the icy concrete. The youngest ones, nine years old, took the hands of adult helpers and looked around with big and baffled eyes, while the teenage boys, 16- and 17-year-olds, joked, acted tough, and tried to shrug off the misery they were escaping and their fears for what lay ahead.

The children had been evacuated from towns near the frontline of Ukraine’s conflict between government forces and Russian-backed separatists, and on Tuesday night they were midway through a long and difficult journey.

When all 36 children were ready they were led across the car park, through the station underpass and to a train that was waiting to carry them through the freezing night to the Black Sea resort town of Odessa.

“My parents couldn’t come, they have to stay at home and look after things there – the flat and the car, things like that,” said Dima (16).

All the children had been sent away by their parents for their own safety, and they put on brave faces as the cameras of local television filmed their departure.

“It’s hard, because of course we want to be at home,” said Dima. “But the group’s in a pretty good mood.”

Like most of the children Dima came from Shchastya, a deeply depressed and now war-scarred industrial town whose name means “Happiness” in Ukrainian.

“When the bus arrived in Kharkiv, the kids were delighted just to see people and cars on the streets, and to see the street lights working,” said Tatyana Bednyak, one of an army of volunteers who provide a vast range of services in Kharkiv and across Ukraine, filling the gaping holes left by a state that is stretched to breaking point.

“And tomorrow the children will wake up in a resort on the Black Sea, where they can live and study in safety.”

Tens of thousands of people who fled the conflict zone have sought refuge in 1.4 million-strong Kharkiv, Ukraine’s second-largest city and just a 30-minute drive from the Russian border.

Those who arrive by train are met by volunteers offering advice on finding everything from accommodation and food to medical help and a job, and in the station café they are given free food and warm drinks.

“I have no words for that horror,” said Olya (56), who arrived two days earlier from Debaltseve, the now ravaged rail hub at the epicentre of recent fighting.

“We’ve been living in the basement without light and water. We burned candles, and then they ran out, so we had to get more from the church.”

Her friend Natalya crossed herself and said: “It was just hell. The Ukrainian national guard treated us like dirt, and ran around blind drunk, waving their guns.”

The women slowly shook their heads when asked if international talks could end the conflict and allow them to return home.

Few of those displaced by the war seemed to believe any new ceasefire could hold and lead to a lasting peace.

“I had a good job in Donetsk, and because the company paid taxes to the militants it kept operating, and I got my wages,” said Vlad, an electrician waiting in a queue at Kharkiv station for advice on finding work.

“But I realised this conflict is not going to end any time soon. So I need to start a new life here.”

Tatyana came to Kharkiv last week from rebel-held Yenakiieve, and already works as a volunteer helping other recent arrivals.

“Only Russia knows when this nightmare will end,” Tatyana said. “But I don’t expect it to be soon.”