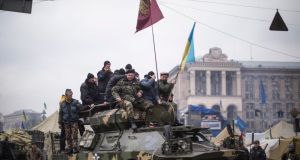 Demonstrators ride atop an armored vehicle through a street near Independence Square in Kiev earlier this week. Photograph: Uriel Sinai/The New York Times

The events in Ukraine this week are changing Europe, potentially in ways that will last for a generation. The emerging European structure can be imagined as a series of concentric circles. Their shape and politics are worth speculating about, based on some large but not implausible assumptions.

Assuming the Ukrainian state stays together, rather than seeing Crimea or other parts secede; that Russia does not intervene militarily on behalf of minorities there; and that Ukraine’s decisive shift towards a European perspective is sustained, we will see the creation of a new category of relationship with the European Union, short of full membership but within its geopolitical orbit.

The central circle of the system would consist of the euro zone, deepened to provide banking, fiscal and economic policy back-up for the single currency. Debate is intensifying on how this inner core will be achieved and whether it is feasible without common debt and redistributive mechanisms and much greater democratic participation and accountability. A common politics is being forged from such contested and contentious issues. But it is not yet clear whether what kind of Europe voters want will outweigh concerns over whether or not people want such a transnational structure at all. The European Parliament elections in May and June will test this on turnout and substantive debate.

The second circle would consist of states that are full members of the EU, the single market and its common foreign policy and security regime. Some, like the United Kingdom, will remain outside the euro core for perhaps this generation, but most others will be “pre-ins”, willing to join when they are ready.


Foreign policy
Ukraine reminds us that economic, financial and currency questions do not exhaust the policy repertoire or the concerns of voters. Foreign policy and security are intimately involved too. The role of the German, French and Polish foreign ministers in brokering a deal to de-escalate the Ukrainian crisis last week, along with the EU’s foreign policy chief Catherine Ashton and her team, was highly significant.

Although belated and cautious, the initiative provided what one commentator has called a formula for “controlled collapse” of the regime after President Viktor Yanukovich fled the next day. The British were notably absent, symbolising their growing distance from the core, which some suggest the Poles want to replace. In her visit to London this week, German chancellor Angela Merkel said she wants the UK to remain a full EU member, but is not willing to concede it an à la carte agenda on reform. Assuming the British do not exit, crises such as this one remind us Britain could have a future role in projecting the EU’s power in a more multipolar world with reduced US dominance, in Europe and beyond it – but only if it is willing to accept a joint European approach.

EU enlargement has been unpopular with many voters despite its success as a foreign policy mechanism – and immigration is even more so now; they are directly linked.


EU embrace
So what will voters make of giving Ukraine a perspective of membership? The EU’s association agreement with Ukraine, rejection of which by Yanukovich precipitated this crisis in November – and with Moldova, Armenia and Georgia, which Vladimir Putin’s Russia has vigorously attempted to head off as interference in its own geopolitical space – will now become more active and germane. But its harsh neoliberal emphasis on restructuring will have to be modified if Ukraine’s economy is not to collapse and if drastic change is not to precipitate secession of Russian-speaking areas most vulnerable to loss of employment.

The EU’s eastern, southeastern and southern “neighbourhood policy” directed to these three countries, the Balkans and North Africa and the Middle East needs to be radically recast and developed after this crisis and those following on from the Arab Spring.

One can therefore imagine a third concentric circle also consisting of “outs” and “pre-ins” – that is of states with a perspective of eventual EU membership such as Turkey, Serbia and perhaps Ukraine, Moldova or Georgia and of those developing closer relations such as Morocco and Tunisia. Norway and Switzerland could also be here, as could the UK if it exits. They would have extensive access to the single market, selective free movements and be in close political dialogue.

Outside that again, and in a privileged position, would be Russia. Willing to work in a mutually co-operative rather than a zero-sum way with the EU, this would require a radical change in Putin’s competing EurAsian concept. That may or may not happen, but he is now less able to prevent the third circle from developing.