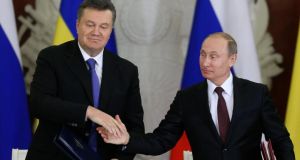 Russia’s President Vladimir Putin (right) shakes hands with his Ukrainian counterpart Viktor Yanukovich during a signing ceremony after a meeting of the Russian-Ukrainian Interstate Commission at the Kremlin in Moscow, today. Photograph: Sergei Karpukhin/Reuters

“He has given up Ukraine’s national interests, given up independence and prospects for a better life for every Ukrainian,” he told crowds on Kiev’s Independence Square.

Mr Klitschko, a world heavyweight boxing champion, called for early elections and said he wanted to meet Yanukovich “in the ring”.

Playing a trump card in his diplomatic contest with the West over Ukraine, Russia’s Oresident Vladimir Putin said Russia would come to the rescue of its financially troubled neighbour, providing $15 billion in loans and a sharp discount on natural gas prices.

It is a bold and risky move by Russia, given the political chaos in Ukraine, where thousands of anti-government protesters remain encamped in Independence Square. For the moment, however, Mr Putin seemed to gain the upper hand with Europe and the United States in their contest for influence.

There was no discussion of what Russia might receive in return for its assistance. Protesters in Kiev have been deeply worried that president Viktor Yanukovych of Ukraine would cut a secret deal to join a customs union that Russia has established with Belarus and Kazakhstan. That would largely preclude any possibility of reviving the accords with Europe, but Mr Putin said the subject had not come up.

While the implications for the more than three-week-old protest movement were not immediately clear, Mr Putin‘s announcement, at a meeting at the Kremlin with Mr Yanukovych, substantially alters the political landscape. It throws Mr Yanukovych an economic and political lifeline that will spare him for the time being from negotiations with the International Monetary Fund, Europe or the United States.

Ukraine, a former Soviet republic of 46 million people, has long been caught in the middle of battles between greater powers to the East and West. Mr Yanukovych has repeatedly sought to play one side against the other, often infuriating everyone and coming across as a vexing and untrustworthy partner.

The country has been grappling with a deepening financial crisis that only worsened after Yanukovych announced abruptly last month that he would not sign political and free-trade agreements with the European Union that had been in the works for years.

Mr Putin said that the money to aid Ukraine would come from Russia‘s hefty reserve funds, and that the price of gas sold by Gazprom, the state-controlled energy behemoth, would be dropped to $268.50 per 1,000 cubic meters - less than the $380 that Western Europe pays for Russian gas - from $400.