Ukraine on edge as Kiev braces for rival rallies 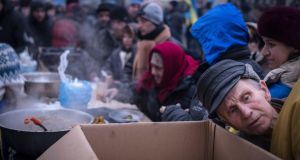 Talks between Ukraine’s president Viktor Yanukovich and opposition leaders have failed to resolve a tense political crisis, amid increasingly dire warnings on the nation’s fate.

Hundreds of thousands of people from across the sharply divided country are expected to flock to rival rallies in Kiev over the weekend, with demonstrations supporting and opposing Mr Yanukovich taking place a few hundred metres apart in the capital.

In a country where the authorities often ban protests, it was an extraordinary decision to let rallies of such mutual hostility take place so close together. Opposition leaders claim Mr Yanukovich’s allies plan to trigger mass unrest in Kiev, allowing him to declare a state of emergency and arrest them for attempting a coup; a plan which, they suggest, is backed by Russia.

“We are appealing to everyone – we are standing on a critical edge, but there is still a chance to save Ukraine, ” said one opposition chief, Arseniy Yatsenyuk. “This story is not being written in Ukraine. The authors of this story do not want the best for Ukraine . . . Their aim is to swallow up Ukraine, to drag her into civil conflict, so as to completely forget about an independent Ukraine,” Mr Yatsenyuk said, in obvious reference to Russia.

‘Tectonic fault’
Russian prime minister Dmitry Medvedev said yesterday: “It seems Ukrainian society has to overcome a tectonic fault that has formed within it. A fault that threatens the stability and even the very existence of the state.”

Mr Yanukovich appeared poised to sign a historic trade and political pact with the EU late last month, which would have reduced Russian influence and aligned Ukraine with the West. But he abruptly pulled out, following secretive meetings with Russian president Vladimir Putin. Mr Yanukovich said threatened Russian trade retaliation would have wrecked Ukraine’s economy, but that he still intended to sign the EU deal when it had been renegotiated and ties with Moscow mended.

Protesters took to the streets, fearing he had scrapped plans for European integration and was taking Ukraine towards a Russia-led bloc of ex-Soviet states, while the EU and US exchanged rebukes with Moscow over alleged interference in Kiev. The demonstrations swelled when riot police beat students and journalists in Kiev’s Independence Square, and grew again this week after protesters repelled a raid by thousands of riot police.

Political divide
Huge barricades and snow banks now encircle the area. The “Euro-revolution” has also reopened deep historical divisions between pro-EU, pro-opposition western Ukraine, and eastern and southern regions that back the government and have close ties with Russia. So-called “self-defence” groups have appeared across the country, some expected in Kiev.

Mr Yanukovich’s Regions Party yesterday dispatched people to the capital in rented buses and trains from towns and cities it controls. The opposition said most of them were being paid to attend the rallies or threatened with the sack from state jobs if they refused.

Washington and Brussels have urged Mr Yanukovich not to use force on protesters who want him to dismiss the government, punish riot police and sign the EU agreement. Former Ukrainian president Leonid Kuchma said yesterday the state was “basically bankrupt”. When asked what he thought about the crisis, he replied: “If I tell you the whole truth, I’ll have to leave the country.”