Putin insists Kiev must negotiate with rebels in east, not with Russia 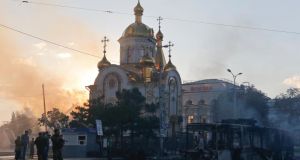 A burnt trolley bus lies on a square near a railway station in Donetsk, eastern Ukraine yesterday. Reuters/Maxim Shemetov

They were in tiny Transdniestria as it fought free of Moldovan control after the collapse of the Soviet Union, when the Russian-speaking population of this sliver of land feared discrimination and Moldova’s possible unification with neighbouring Romania. The three men insist they never met in Transdniestria, and Borodai and Girkin – known by his nom de guerre Strelkov – have now left their official posts in rebel Donetsk, but their old stomping ground may still give clues as to Russian plans for eastern Ukraine.

When Nato accused Moscow this week of sending more than 1,000 troops and armoured vehicles into Donetsk and Luhansk to support insurgents there, it said the Kremlin apparently sought to create a “frozen conflict” in the regions. More than 20 years after they were first wracked by fighting, several corners of the old Soviet Union are still mired in such conflicts, leaving them isolated and impoverished on the fringes of Europe, grey zones reliant on Russia for survival.

Having propped up separatist regimes in the Georgian regions of Abkhazia and South Ossetia for two decades, Russia recognised them as independent states following its brief August 2008 war with Tbilisi.

Only Venezuela, Nicaragua and Nauru followed Moscow’s example, and Abkhazia and South Ossetia still endure major problems in trade and diplomatic relations with the rest of the world.

Russia has thousands of soldiers based in both these officially Georgian regions and about 1,400 troops in Transdniestria, with the support of local separatist leaders but to the annoyance of the governments in Tbilisi and Chisinau.

The military alliance is unlikely to admit any new member that does not control all its formal territory and which – albeit unwillingly on the part of the central government – plays host to the Russian armed forces.

Despite being sponsor and security guarantor of Abkhazia, South Ossetia and Transdniestria, Russia claims it is not party to their dispute with Tbilisi and Chisinau, and insists these capitals negotiate not with Moscow but the rebels.

In this way, the Kremlin seeks to maintain plausible deniability over its involvement in these frozen conflicts and fend off criticism and possible punishment from the West for its role there, while keeping its finger on the switch by which it can raise or reduce the amount of trouble these areas cause to Georgia and Moldova.

Now Russian leader Vladimir Putin appears to be following a similar strategy in Donetsk and Luhansk where, in the week Ukraine and Nato openly accused him of sending troops into the regions, he insisted Kiev talk not with him but the rebels.

Afterwards, Georgia’s former president Mikheil Saakashvili said he had seen it all before: “The pattern is easy to discern: stir separatist sentiment through a relentless propaganda campaign; form, train, and arm local separatist militias; create a permanent bleeding wound of conflict; and step up direct involvement depending on the level of success of government troops pushing back against the separatists.”

Once the conflict is frozen, he wrote in Foreign Policy, “Putin can continue to destabilise the rest of Ukraine, infiltrating separatist forces from the controlled territory, turning off energy supplies and strangling the fragile economy. It’s the same playbook he has used in Georgia and Moldova.”

The strategy would be far less costly for Russia – financially, diplomatically and militarily – than occupying eastern Ukraine, but could still sink a fledgling pro-western Kiev government that the Kremlin sees as a grave threat to its regional interests.