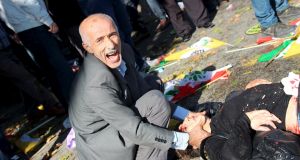 A man asks for help after an explosion during a peace march in Ankara on Saturday. Photograph: Tumay Berkin/Reuters 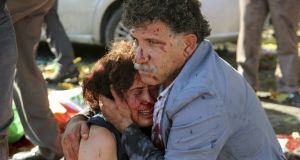 A couple hug after an explosion during a peace march in Ankara on Saturday. Photograph: Tumay Berkin/Reuters

Eighty-six people were killed in twin bomb blasts in the Turkish capital Ankara on Saturday, while another 186 people were wounded including 28 who are in intensive care, health minister Mehmet Muezzinoglu told a news conference.

Asked about security measures at the rally where the attacks took place, interior minister Selami Altinok told the same news conference there were no security shortcomings.

The explosions were apparently the result of a suicide bombing, a senior Turkish security official told Reuters on Saturday, noting no vehicle was destroyed in the explosions.

The official, who declined to be identified, also said a ban had been imposed in Turkey on broadcasting images which directly showed the bomb blasts.

Witnesses said the two explosions happened seconds apart shortly after 10:00 am local time as hundreds gathered for a planned “peace” march to protest against the conflict between Turkish security forces and Kurdish militants in the southeast.

Violence between the state and the Kurdistan Workers Party (PKK) militants has flared since July, when Turkey launched air strikes on militant camps in response to what it said were rising attacks on the security forces. Hundreds have since died.

Those involved in the peace march tended to the wounded lying on the ground, as hundreds of stunned people wandered around the streets. Bodies lay in two circles around 20 metres apart where the explosions had taken place.

The attacks come three weeks ahead of a parliamentary election in Turkey and at a time of multiple security threats, not only in the restive southeast but also from Islamic State militants in neighbouring Syria and home-grown leftist militants.

The Nato member has been in a heightened state of alert since starting a “synchronized war on terror” in July, including air strikes against Islamic State fighters in Syria and PKK bases in northern Iraq. It has also rounded up hundreds of suspected militants at home.

Designated a terrorist group by Turkey, the United States and the European Union, the PKK launched a separatist insurgency in 1984 in which more than 40,000 people have been killed.

The state launched peace talks with the PKK’s jailed leader in 2012 and the latest in a series of ceasefires had been holding until the violence flared again in July.