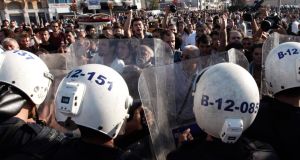 As the sun sets over Istanbul, hundreds sit cross-legged along Istiklal Caddesi, its busiest pedestrian street, preparing for iftar, the meal that breaks the Ramadan fast.

It is a rather incongruous picnic: plates of food are laid on the ground as curious tourists walk past. Just a few metres away, scores of riot police stand watching.

Now and then a chant goes up from those gathered for the makeshift iftar: usually references to the clashes that erupted on nearby Taksim Square in late May when police moved on demonstrators protesting plans to redevelop an adjoining park. “This is a symbolic iftar,” says Ahmet, a student who took part in the initial demonstrations. “We’re here to make a statement. Our protest continues despite everything.”

Two months have passed since anger over police use of force against protesters trying to prevent the razing of Gezi Park ballooned into a wider expression of discontent towards Prime Minister Recep Tayyip Erdogan and his Islamist-rooted AK Party (AKP).

Five demonstrators and one police officer were killed as protests rippled across the country, prompting the most serious unrest Turkey had witnessed in years. While sporadic protests – and arrests – still take place in Istanbul, the nationwide rallies have abated, leaving Turks mulling over what the Gezi Park demonstrations say about their country, its government – and its future.

Alienated populace
Erdogan’s harsh rhetoric – he repeatedly denounced the protesters as “looters”, “marginals”, agents of foreign powers and shadowy speculators bent on undermining the Turkish lira – has not been forgotten. His framing of the biggest challenge he has faced in more than a decade in power fired up the AKP base but further alienated the other half of the population that did not vote for the party.

“Turkey has calmed down but it is still very tense and the frustrations of both sides are stronger than ever,” says Mustafa Akyol, columnist for the Hurriyet daily. “The government’s propaganda that this was a conspiracy against Turkey has convinced many. The country’s political camps are now more bitter towards each other.”

Across the Bosphorus on Istanbul’s Asian side, Turkey’s EU minister Egemen Bagis breaks his fast with the AKP faithful at a public iftar in the working-class neighbourhood of Umraniye. Several thousand residents sit at tables along a sloping street. Bagis and AKP officials give rousing speeches extolling Turkey’s progress.

When Bagis makes a dismissive reference to the Gezi Park protests, arguing it was an attempt to hamper Turkey’s rise, the crowd bursts into applause.

“These are conservative people, they were against the demonstrations,” says one of the minister’s aides. There is one discordant note, however: when Bagis and his entourage visit a nearby mosque, a young woman wearing shorts and carrying a Turkish flag turns up outside, looking agitated. It appears she is there to protest but she leaves after locals quietly remonstrate with her.

Later, on Umraniye’s main square, Bagis rejects the suggestion that the Gezi Park protests indicate a deeper malaise in Turkey. “There are unhappy people within the society but they are not representing the whole society,” he says.

Bagis notes a recent poll which showed AKP ratings at 52 per cent in Turkey as a whole, and 54 per cent in Istanbul. “The others are given the right to speak, their freedom of speech is protected, even if we don’t enjoy what they are saying,” he argues. “We welcome demonstrations but when the protesters resort to violence, the police have to act and protect the lives and property of the people. I am not saying Turkey is perfect but it is doing much better than before . . .”

Bagis says the AKP is confident it will sweep Turkey’s forthcoming municipal, presidential and general elections. Mustafa Akyol believes while the core AKP vote is solid, there are others having misgivings. “People outside the party who voted for Erdogan before now think he is going too far.”

Many of the protesters who massed on Turkey’s streets in June accuse Erdogan of increasingly authoritarian ways, citing the alcohol restrictions, a stifling of the media, and his demand that women have at least three children.

Bagis rejects such criticisms. “Erdogan is not dictating people’s lives. He sees this country as a big family, he sees himself as the leader of the family and he makes recommendations to them,” he says. “I have known him for 12 years, this is Erdogan 101. He has not changed. This is the interpretation of some circles who are trying to create a negative image of him because they are not happy that he is making Turkey powerful with such popular support.”

Power grab
Before the Gezi Park protests there was unease – including among AKP supporters – over Erdogan’s bid to accumulate even more power by changing Turkey’s constitution to expand the role of president, which he plans to run for in the next election. Bagis believes it would be a shoo-in. “If he runs, I have no doubt he would be elected in the first round with a huge margin.”