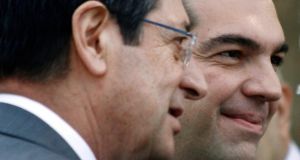 Greece’s prime minister Alexis Tsipras has told Greek Cypriots that the dissolution of the troika would serve the interests of both Greece and Cyprus as troika experts were on the island reviewing the government’s compliance with bailout requirements.

Ruling out applying to Russia for financial aid, he urged Greek Cypriots, historic allies of Greece, to follow Athens’s example and negotiate a new deal on the island’s debt in spite of German opposition.

Greece, Cyprus, Ireland and Spain have complained of harsh treatment from the troika – comprised of the European Commission, European Central Bank and IMF – but Greece has been the first to call for its dissolution.

Adhering to the tradition of making Cyprus a Greek prime minister’s first foreign destination after taking office, Mr Tsipras reiterated his vow to meet Greece’s obligations toward lenders while dropping the harsh austerity measures laid out under the terms of the country’s €240 billion bailout.

Following a meeting with Cypriot president Nikos Anastasiades, Mr Tsipras said, “It is not just Greece and Cyprus that are in crisis. Europe is in crisis.”

He argued that Europe should adopt development rather than austerity. He told Cypriot leaders that “the people of Greece and Cyprus have made unfair sacrifices due to the imposition of failed austerity packages”, dismissed suggestions that the two countries should leave the euro zone, and argued that the “southeastern flank of the EU and the euro zone would be maimed without Greece and Cyprus”.

These words were music to many Cypriot ears and were meant to encourage Cyprus to stand with Greece. However, Mr Anastasiades, a staunch conservative, struggling to convince a rebellious parliament to meet bailout conditions, is unlikely to heed Mr Tsipras, an ambitious leftist seeking to ease debt and overhaul Greek state structures.

Cyprus has suffered economic meltdown since March 2013 and was forced to negotiate a €10 billion bailout extended on condition that it raise a similar sum itself to refinance its troubled banks. This was achieved by carrying out a “haircut” on deposits above €100,000, liquidating the second largest bank and implementing major structural reforms.

Unemployment in Cyprus stands at 16.4 per cent and 32.8 per cent for those under 25. GDP contracted by 0.3 per cent during the last quarter of 2014 although predictions for this year suggest 0.3 per cent growth.