‘I’m not ‘anti’ anything; I’m just common sense, I say it like it is,’ says billionaire

On ITV's Good Morning Britain, Donald Trump has said that British Muslims are 'protecting each other,' and need to, 'report the bad ones'. Video: ITV/GMB 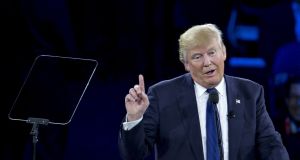 British Muslims are “absolutely not reporting” suspected terrorists, Donald Trump said as he pledged to “hit Isis so hard you wouldn’t believe it” if he becomes US president.

The front-runner for the Republican nomination told ITV’s Good Morning Britain that Muslim communities were not doing enough to prevent attacks like the ones in Brussels on Tuesday.

More than half a million people signed a petition calling for the tycoon-turned-politician to be banned from the UK after he demanded a block on Muslims entering the US and claimed parts of London were “so radicalised” police were “afraid for their own lives”.

He said: “I would hit Isis (another name for Islamic State) so hard you wouldn’t believe it and I would get the people over there to put up their soldiers because it’s about time that somebody did it.

“But I would have such back-up like you’ve never seen before in terms of air power, air strikes etc.”

“It’s like they are protecting each other but they are really doing very bad damage,” Mr Trump said, complaining about the failure to turn in those who went on to launch a deadly attack in San Bernardino, California.

Mr Trump denied he was racist, telling the programme: “I’m not ‘anti’ anything; I’m just common sense, I say it like it is.”

He said: “I have great respect for Muslims, I have many friends that are Muslims. I am just saying there is something with a radicalised portion that is very, very bad and very dangerous.”

He said he was astounded at the failure of anyone to turn in Salah Abdeslam, the chief suspect in the Paris terror attacks who was holed up in his own neighbourhood in the Belgian capital.

“There is something wrong, and we have to get to the bottom of it, when someone like who was just captured was really coddled and taken care of by people that live in the neighbourhood.

He said: “I knew Brussels years ago. I was there probably three or four times and it was so beautiful, so secure and so safe. Now it’s an armed camp,” he said.

“What’s going on there and what’s going on in many other locations — like Paris and others — is a disgrace, an absolute disgrace that we allowed to happen.”

“All you have to do is look at the cities where there’s been a large inflow and something’s different,” he said.

“There is very little assimilation for whatever reason ... they want to go by their own sets of laws.”

Mr Trump told Mr Morgan — who said he considered the billionaire “a good friend” he had known for a decade — that he did not believe many people in the UK were scared of the idea of him in the White House.

“I don’t think too many are. Honestly, I’m a very normal person. I happen to be intelligent, very intelligent, I guess, based on certain results that I get in doing things,” he said.

“I am a person that just wants to see things run properly. I don’t want to see people hurt.”

He told the programme: “What we have to recognise is when some of these statements are made that fuel this idea of bigotry and really fuel the thing that terrorists themselves want — that Muslims are apart from the West and cannot be seen as equal citizens — these things are not good for our society.”

Mr Versi said he cannot speak for the rest of Europe but said in London it is “not the case” that Muslims are not reporting people they suspect to be extremists, adding that there is a “much more integrated society” in the UK.

He said: “In the UK British Muslims have been very outspoken on this issue.”

Mr Versi said research had shown that the overwhelming majority of Muslims in Britain would report suspicious activity.

He warned it was concerning that people are confusing criminality and religion.

He said: “We have to understand how much of this is due to them being Muslim communities or just a community of criminality which people are working within? And we have to try and not conflate the two together.”

Mr Versi warned that bigotry against Muslims is growing, describing it as “a serious concern”.

“That’s dangerous for the cohesiveness of our society.”