Slovenia, Croatia and Serbia trade accusations over failure to co-ordinate flow of people 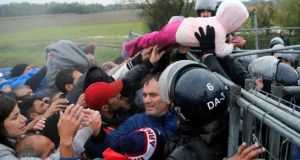 A child is lifted over a fence by Slovenian policemen as migrants attempt to cross the border near Trnovec, Croatia. Photograph: Reuters

Thousands of asylum seekers have become trapped on two Balkan borders as bottlenecks choked a new route towards western Europe, with many stuck in conditions that the United Nations refugee agency called “awful and hellish”.

The worst situation developed at Berkasovo on Serbia’s border with Croatia, where thousands stood for almost 24 hours in remote, rain-lashed fields of knee-deep mud, unable to move forward or back as Serbian buses continued to deliver new arrivals.

“It’s absolute chaos. There are at least 4,000 people here, more and more are coming, and very few are being allowed into Croatia,” said Jan Pinos, a Czech volunteer on the scene at Berkasovo.

Mr Pinos said it was by far the worst situation he had seen in several weeks of volunteering at trouble spots along the so-called Balkan route for migrants, most of whom are from Syria, Afghanistan, Iraq and other conflict zones.

“Last night there were fights, with knives and sticks. We jumped in and managed to calm the situation down, but this is all too much for 30 Czech volunteers to deal with – this is a situation for the government and army,” Mr Pinos said.

“People are frustrated and have no support or information. It has been raining heavily all day, people are cold and sick, including babies. Serbian police won’t let people move back, and Croatian police won’t let them go forward. We need big tents to protect people from the rain – it’s close to total collapse here.”

Melita Sunjic, spokeswoman for the UN refugee agency, described the conditions at Berkasovo as “awful and hellish”.

Yesterday evening, local media reports said migrants were being allowed to cross into Serbia – alleviating congestion for at least a few hours.

Croatia was then forced to send all the migrants – most of whom want to get to Germany – to tiny Slovenia, which in turn puts them on buses to Austria. Slovenia says it will only accept a maximum of 2,500 or so migrants a day, however, in line with the numbers that Austria says it will accept, so as to prevent a huge backlog of people building up in the former Yugoslav state of two million.

Croatia sent buses and trains carrying more than 5,000 migrants to its border with Slovenia yesterday, however, according to Bostjan Sefic, state secretary at Slovenia’s interior ministry.

“Croatia is ignoring our pleas, our plans,” he said.

Hundreds of people also waited for hours in teeming rain to cross from Croatia into Slovenia, with little or no help from state or non-governmental groups.

Ranko Ostojic, Croatia’s interior minister, dismissed Slovenia’s complaints and accused it of reneging on earlier pledges over how many migrants it would take.