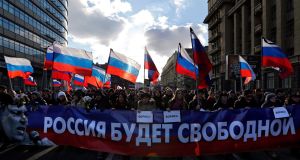 People participate with a banner ‘Russia will be free’ during a memorial march for Boris Nemtsov to mark in Moscow on Saturday to mark the first anniversary of his murder. Photograph: Yuri Kochetkov/EPA 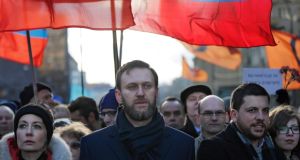 Thousands of people marched through central Moscow on Saturday to honour Boris Nemtsov, the Russian opposition leader who was assassinated a year ago on a bridge overlooked by the Kremlin.

Nemtsov, a fierce critic of Russia’s president Vladimir Putin and a former deputy prime minister, was shot dead at point blank range on the night of February 27th last year in an attack that had all the marks of a contract killing.

Russian police have arrested five Chechen men accused of killing Nemtsov for cash, but an investigation of who ordered the crime has stalled amid a slew of conspiracy theories.

Opposition leaders suspect that Ramzan Kadyrov, the hardline president of Chechnya and a protegee of Mr Putin, had a hand in Nemtsov’s murder. Mr Kadyrov has denied involvement.

A nuclear physicist by training, Nemtsov was one of the young, western leaning liberals brought into government by Russia’s then president Boris Yeltsin in the 1990s as the country turned its back on seven decades of Soviet communism.

Yeltsin saw in the brilliant, handsome and unfailingly ebullient Nemtsov a potential successor, but after Mr Putin came to power in 2000, the politician was sidelined and joined the opposition.

Moscow police said 7,000 people took part in the memorial march on Saturday that, following a route approved by city authorities, wound through the centre without passing near the bridge where Nemtsov was killed. Organisers estimated that at least 20,000 turned out.

Similar rallies took place in other major Russian cities including St Petersburg, and Yaroslavl on the River Volga, where Nemtsov was a serving as a deputy in the regional parliament at the time of his death.

Mikhail Kasyanov, a former prime minister, who now heads Parnas, a political party co-founded by Nemtsov, led the Moscow march flanked by the slain politician’s son and other leading figures in the Russian opposition.

Ilya Yashin, the deputy chairman of Parnas, went out ahead with a microphone chanting, “Russia without Putin!” , “Kadyrov is a disgrace to Russia” and other slogans that were echoed by the crowd.

Some of the marchers carried portraits of Nemtsov with quotations pulled from his speeches and writings. “Putin’s policies are based on total lies,” read one, and “Russia will be free,” another.

Russian police were out in force, although there were no arrests. Some officers sowed confusion, telling demonstrators it was time to go home even though the march had only run half its prescribed two-hour course.

Many at the rally were veterans of the wave of massive anti-government protests that Nemtsov led in Moscow in 2011-2012 before Mr Putin was elected to a third term.

“Nemtsov was one of the only opposition politicians capable of uniting people, bringing together the young and the old, the blind and those who could see,” said Anna, a pensioner who was supporting her sister on her arm. “His murder was treachery.”

Nemtsov’s death has prompted rival Russian opposition groups to try to overcome their differences and present a united front at regional elections this year and the presidential poll in 2018. But many Kremlin critics have fled Russia, fearing persecution.

“It is terrifying,” said one woman who was openly weeping at the march. “Russia has changed course a bit in the last 20 years, but it has always been terrifying here,” she added.