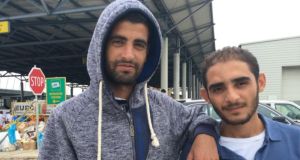 Beder Jasim, from Aleppo in Syria and his friend Ibrahim Momtaz. “We feel great now. Thank you to Austria. In Hungary things were very bad, and we were scared. Now we feel safe” said Mr Jasim. 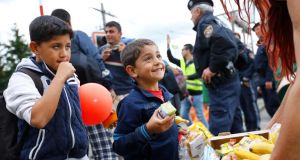 Thousands of migrants have arrived in Germany and Austria after Hungary eased travel restrictions and let them continue their westward voyage, giving vital but only temporary relief in a crisis that has deeply divided the European Union.

Red Cross workers and volunteers were out in force to greet and help the people on the Austria-Hungary border, and at train stations in Vienna and German cities as they reached the end of weeks-long journeys from the Middle East and Africa.

More than 10,000 people, most of them Syrian refugees, were expected to have entered Germany by this morning, following Hungary’s decision on Friday night to let them use public transport and cross the border into Austria.

Hungary’s populist government has taken a hard line on the crisis, saying all migrants entering the country must be registered and sent to camps for asylum seekers – despite those facilities being massively overcrowded and underfunded.

Prime minister Viktor Orban’s policy cracked on Friday, however, when hundreds of migrants broke through police lines after being held on a train near one such camp, and walked along rail tracks towards Austria; another group set off down Hungary’s M1 motorway in the same direction from Budapest’s main train station.

In what the migrants called their “freedom march”, they walked in a long column for hours and then settled on the grass verge to sleep under rainy skies; before midnight, Hungary agreed to send buses to take them to the border.

“Now we have food, water, and we are not in Hungary,” said Syrian refugee Ibrahim Momtaz, at the vast Nickelsdorf customs station just inside Austria’s eastern border.

“We will see what comes next, and where to go. But for now, this is all we need.”

At the windblown truck park at Nickelsdorf, scores of aid workers gave the migrants food and warm drinks, medical help, clothes and blankets, before they were taken further west by bus or train.

“I want to go to Germany to study computers,” said Mr Momtaz, who left Deir Al-Zur in Syria a month ago.

His friend Beder Jasim, from Aleppo in Syria, added: “We feel great now. Thank you to Austria. In Hungary things were very bad, and we were scared. Now we feel safe.”

“You can see people coming back to life,” said Aytekin Yilmazer (37), a volunteer from Vienna.

“Finally, I now have the feeling that my government is trying to help. The way they opened the border and are providing for people here is good, and of course Germany is doing a lot.”

Behind him, migrants waited to board Austrian buses. The previous night, many feared that the Hungarian buses sent to take them to Austria would instead go to camps, as did a train that hundreds boarded last Thursday in Budapest.

“If you know European history, you don’t put people on trains and take them against their will to camps,” said Mr Yilmazer.

Germany has pledged to accept some 800,000 refugees this year – most of them likely to be from Syria – but Hungary and other central European states have rejected Berlin’s calls for a quota system to settle refugees around the bloc.

Mr Orban says Hungary, a country of 10 million, cannot cope with the more than 150,000 refugees who have passed through so far this year, and he blames Germany for encouraging more to come with its welcoming stance.

Hungary’s parliament is expected to pass new measures to tighten border security, and to allow soldiers to support more than 2,000 police now patrolling the frontier with Serbia.

Hungary is also building a four-metre-high steel barrier along the entire 175km border, having seen a triple-layer razor-wire fence make no difference to the number of refugees crossing, with more than 3,000 arriving on some recent days.

“We are going to deploy the police, then if we get permission from parliament, we will deploy the army, and after September 15th, step by step, we will control the entire border,” said Mr Orban, who also fears that an influx of Muslims to Europe will undermine its security and traditional Christian identity and values.

As he waited at Nickelsdorf for a bus to take him further west, Ahman Urabi from Damascus in Syria said the worst part of his voyage was being stuck at Budapest train station for days amid growing tension and squalor.

“I have passed the toughest point in my journey now,” he said. “At the station in Budapest, I was ready to pay the ‘mafia’ to take me to Austria,” he recalled, using the term that migrants use for people smugglers.

“The price was not fair – they wanted €750 in advance – but I was almost ready to do it. My family wired money to me in Budapest. But I changed my mind and now I am here.”

“I would like to live in Berlin, and do my masters. I qualified in civil engineering in Syria,” he added.

Mr Urabi thinks he gave a total of about €3,000 to different people smugglers to get him on a rickety boat from Turkey to Greece, and then to help him cross Macedonia, Serbia and Hungary to Budapest.

“We changed our mind about using mafia when we heard about the truck,” he said, recalling the death of 71 migrants, thought to be Syrian, in a truck that was abandoned late last month just a few kilometres down the highway that runs past Nickelsdorf.

“But we have to be strong now, to complete the rest of our journey to Germany.”