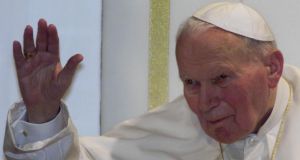 Relics connected to John Paul II are likely to increase in value ahead of his canonisation in April. Photograph: Reuters

The theft of a reliquary containing the blood of John Paul II has been linked to Satanism by an Italian consumer rights lobby. That remarkable assertion was made today by the Italian Anti-Plagiarism Observatory in the wake of reports of the theft of a gold reliquary and a crucifix from a church in San Pietro della Ienca, at the foot of the Gran Sasso mountain in Abruzzo.

Since 2011, the church of San Pietro della Ienca has become a sanctuary dedicated to the memory of the late Pope John Paul II. The handsome little church, picturesquely situated beneath the snow-covered Gran Sasso, is right in the heart of a mountainous region much loved by the late Pope.

Legend has it that, in the early days of his pontificate, John Paul II would occasionally slip out of the Vatican during the winter months to go ski-ing on the Gran Sasso. In his later years, he continued to visit the area, this time restricting himself to long walks in the hills.

Given his attachment to the area, the Pope’s long time private secretary, the current Archbishop of Cracow, Cardinal Stanislaw Dziwisz, in August 2011 donated a gold reliquary, containing a small amount of the late Pope’s blood, to the church of San Pietro della Ienca. On Sunday morning, however, a custodian discovered that the church had been broken into and that both the reliquary and a crucifix were missing. This morning more than 50 policemen, aided by sniffer dogs, searched the area close to the church in the belief that the thieves might have immediately dumped the stolen objects.

Some commentators, however, have suggested that the fact that nothing other than the crucifix and reliquary were stolen from the little mountainside church might mean that this was a “commissioned” robbery. Local politician Pasquale Corriere, much involved in the promotion of Gran Sasso tourism based around the figure of John Paul II, said yesterday that there were only three such reliquaries in existence.

Meanwhile, the head of the Anti-Plagiarism Observatory, Giovanni Panunzio, suggested that the theft might be linked to Satanism, given that the end of January represents a key moment in the Satanic calendar. Some Satanic cults see the period of January 20-27 as a time for the “abduction, ceremonial preparation and holding of a sacrificial victim for Candlemas”, a feast day celebrated along with other “satanic revels” on February 2nd.

In more prosaic terms, it is arguable that any reliquary linked to John Paul II is about to increase greatly in value, given that next April 27th, along with the late Pope John XXIII, he will be canonised by Pope Francis, making both Popes saints.