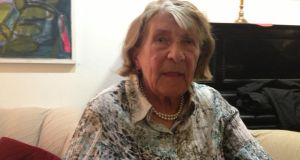 Brigitte Eicke: her diary, written in shorthand, reveals the normality of wartime life for a teenager in Berlin and is in stark contrast to the experiences of Anne Frank. Photograph: Derek Scally

January 13th, 1943 was a bad day for Brigitte Eicke, and for Anne Frank. Brigitte spent the evening in her Berlin apartment stitching a coat for her mother’s birthday – not that she felt much like giving her anything.

“Mam whinged as usual, there are some days when we get on terribly,” Brigitte wrote in her diary.

Anne Frank – living in Amsterdam’s Prisengracht street, 650km east – didn’t get on with her mother either. But on that Wednesday she had other concerns.

“Outside it’s terrible,” she confessed to “Kitty”, her red-and-white tartan-covered diary. “Day and night the poor people are being dragged away, with nothing more with them than a rucksack and a little money ... there’s nothing more for us to do than to wait as quietly as possible for the end of our misery. The Jews wait, the Christians wait, the entire globe waits, and many wait for their death.”

Berlin-born Brigitte Eicke, who documented the second World War from a very different perspective, survived the conflict. Anne Frank perished in the Holocaust exactly 70 years ago.

Their diaries are complementary records of a terrible time, shot through with staggering normality: hot-and-cold teenage mood swings, budding romances and how quickly one adapts to the arbitrariness of war and persecution. When Brigitte Eicke began her a diary on her 15th birthday, Christmas Eve 1942, Anne Frank had been writing since her 13th birthday six months previously.

Brigitte was born in 1927 and raised in Berlin’s working-class district of Prenzlauer Berg. Anne was born in Frankfurt in 1929, and her middle-class Jewish family fled to the Netherlands in 1934. When the Nazis followed six years later, they went into hiding in the Amsterdam premises of the Frank family business.

Anne’s diary is a tragic document of a lively, insecure teenager confined for her protection to a cage, a cage that proved a trap.

Three days after her last diary entry – August 1st, 1944 – the family were betrayed, rounded up and deported. Anne died of typhus in Bergen-Belsen camp in March 1945 or, as we learned this week, possibly February. She never achieved her dream to be a journalist, though her diary, saved by friends, brought her posthumous fame.

Brigitte Eicke – known to all as Gitta – lived for most of the war alone with her mother on Berlin’s Immanuelkirchstrasse. Her father was killed on the ninth day of the second World War. Training to be a secretary, the 15-year-old began her diary for shorthand practice. She typed up the pages later and stored them, forgotten, in the base of her bed for decades. Now published for the first time, her diary is a fascinating companion to Anne Frank’s.

Anne is a dreamer with literary ambitions, who describes and reflects the Nazi terror; Brigitte’s writing is matter-of-fact and either oblivious or apathetic to the terror around her.

“Brigitte’s diary is so valuable because she wrote it in shorthand,” said writer Annett Gröschner, who discovered and co-edited the diaries. “We get an uncensored view of wartime Berlin from a person who could be completely open. Even if someone found the diary they wouldn’t be able read it.”

Two things jump out from her diary: how unremarkable the Third Reich was for a teenager on the inside, and how normal life was in wartime Berlin.

For instance, Brigitte was a trainee secretary at Köster’s, an “Arianised” department store chain. While the war raged elsewhere in Europe, her free time was filled with trips to the theatre, ice cream parlours and dances.

Anne was shut out of daily life twice over – first by the Nazi Nuremberg Laws, then in her family’s hideaway – yet has a better overview of Nazi persecution. Brigitte’s diary refers just once to a Jew disappearing: the cobbler across the street.

She still remembers that day today, as well as the disappeared of six or eight Jewish girls from school during second class in 1936. And there was her walk to work through Berlin’s Jewish neighbourhood: a sea of yellow stars one day, gone the next.

As she sits in a cafe, lost in thought, it’s easy to imagine an 85-year-old Anne Frank joining her to swap tales at the mortification – and pride – of your private diaries being published. However, there is a difference in the two women: Anne Frank saw what was happening and, as a Jew, didn’t survive; Brigitte Eicke saw yet didn’t see the Jews disappeared, and survived – something that appears to bother her more now than it did then.

“I can’t remember if we learned where they’d gone,” she says today. “We young people were indoctrinated to believe in the good of the regime to the end.”

Brigitte Eicke: “Went in BDM (Nazi girl guide) uniform to the Admirals palast to see Madame Butterfly. It was wonderful, my first opera.”

Anne Frank: “After the war I definitely want to publish a book with the title The Rear Building. It’s questionable whether this will happen but my diary will serve as a basis.”

Brigitte Eicke: “Sunned myself on the roof. Failed assassination on the Führer. In the night we heard the speeches of the Führer, Dönitz and Göring. Wonderful.”

Anne Frank: “Great news! There was an assassination attempt on Hitler ... Sadly, ‘divine providence’ saved the Führer’s life and he survived with a few grazes and scorch wounds.”

Brigitte Eicke: “It rained all day. We had a nap in the afternoon and were in bed already by 10. It’s a shame, such a waste of a lost evening.”

Anne Frank: “Dear Kitty! ... I’ve often told you that my soul is divided in two. One side contains my boisterous happiness ... (and) squeezes out the other, much nicer, side that is more pure and deep. Nobody knows the nice side of Anne...” [Anne’s final diary entry]

Brigitte Eicke: “At 3am Frau Schöbs came into the cellar and said: the Führer is dead, the war is over. I could only let out a scream... we went on to the street and all the soldiers were withdrawing, it is so sad.”