Tension builds as Greece struggles to cope with influx 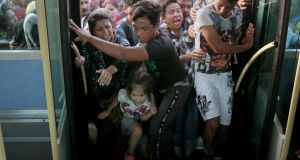 Refugees and migrants try to board a bus following their arrival onboard a passenger ship at the port of Piraeus, near Athens. Photograph: Alkis Konstantinidis/Reuters

The director of the Irish office of an international medical humanitarian organisation has described her shock at the absence of basic reception conditions and provision of services for refugees and migrants arriving on the Greek island of Kos.

The island was the intended destination for the family of Aylan Kurdi, the three-year-old boy whose drowning last week focused attention on the often perilous sea journey some take from Turkey to reach the EU.

“We have a situation where there are thousands of people here, many refugees among them, with no proper shelter, no proper latrine or shower facilities, water distribution or anything like that,” said Jane-Ann McKenna, director of Médecins Sans Frontières/Doctors Without Borders (MSF) in Ireland, who likened the situation on the island to a massive homeless crisis.

In recent months, Greece has become the prime gateway for Syrian refugees and migrants to enter the European Union. After receiving temporary residence documents, they continue their journey through the Balkans and central Europe to other EU destinations, mainly Germany and Sweden.

The Greek authorities have deployed additional resources to speed up the registration process, but it is still taking up to a fortnight for people to get their paperwork, Ms McKenna said.

“People are frustrated, but are mostly tired and keen to move on. They are getting by on what they brought with them and are conscious that whatever little they have, they need it to keep them going for a long time. The shorter amount of time they can spend here, the better because they have to purchase everything themselves, be it a tent, food or water.”

In recent days, tension has built up on some islands, particularly Lesvos, where yesterday hundreds of refugees and migrants staged a demonstration in the island’s main town of Mytilini to highlight the slow pace of registration. They chanted slogans such as “Athens, Athens”, “Let us go” and “We love Merkel”, in reference to the German chancellor who has promised to accept 800,000 refugees this year.

On Sunday, police in Mytilini arrested two teenage locals who confessed to firing petrol bombs at two Syrian families camped in different parks in the town. One Syrian man received light injuries in the attack and was sent to hospital. Greece’s caretaker migration minister Yiannis Mouzalas has estimated that there are between 15,000 and 17,000 refugees now on Lesvos, which he said only has the capacity to cope with a maximum of 5,000.

The caretaker government, which is running the country until the general election on September 20th, also announced yesterday that it was requesting the EU activate its crisis-response body to provide staff, medical and pharmaceutical supplies, clothes and equipment “in order to substantially strengthen the efforts . . . to manage a volatile situation”.