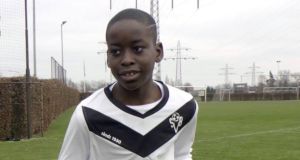 Gláucio (13) was born in the Netherlands and has just started his second year in post-primary school.

Two teenagers* – one of whom was due to begin studying for a law degree yesterday – face imminent deportation from the Netherlands to Angola along with their parents because their father is suspected of having committed war crimes there 15 years ago.

One of the teenagers, named only as 13-year-old Gláucio, was born in the Netherlands and has just started his second year in post-primary school, while his sister, Márcia (18), who came to the country as a toddler, was recently awarded a place at Erasmus University in Rotterdam.

The teenagers’ father was detained at his home by immigration officials last Friday morning and has since been held at a deportation centre in Zeist, in the centre of the country, where a children’s rights organisation held a protest vigil last night calling on the government to reverse the decision.

However, although he has never faced charges of any kind, their father is now regarded as a potential war criminal, and is therefore not eligible for refugee status. As a result, his children do not qualify for the amnesty. Although the parents have not been named, the teenagers’ father is understood to have fought in the Angolan civil war, which ran from the end of Portuguese colonial rule in 1975 until 2002, and in which more than 500,000 people were killed.

Justice minister Klaas Dijkhof has defended the deportation decision on the basis that the teenagers do not qualify for permanent residence because of their father’s “status”.

Opposition parties, including the Greens, the Socialists and Christian Unity, oppose it and are supporting a last-minute online petition seeking to allow them to stay.

However, the most powerful voice in the teenagers’ favour came last night when the children’s ombudsman described the decision as “unacceptable” – especially since the family was still in the process of making a final appeal through the courts.

‘Interests of the children

“Márcia and Gláucio are being hurt because of something their father may or may not have done 15 years ago. One way or another, it was not their fault – but they are being made to suffer for it.”

Figures show that although 3,260 children applied for residency permits under the government’s amnesty last year, only 675 – and 775 family members – were successful.

*This article was amended on September 1st, 2015