‘There will be no rupture, but no continuation of subjugation either,’ says Alexis Tsipras 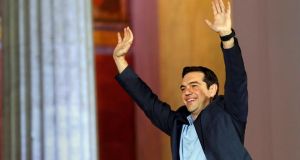 Greece has turned a page, is leaving fear behind and is moving forward with hope and dignity, the youthful leader expected to become the country’s next prime minister told jubilant, flag-waving supporters in central Athens after leading his left-wing Syriza party to its first victory in a general election.

“The people have handed us a clear mandate. The people’s verdict brings to an end the vicious circle of austerity. It cancels the memorandums of austerity and destruction and makes the troika a thing of the past,” Alexis Tsipras declared at an open-air rally outside the city’s university building.

“Tomorrow the hard work begins,” Mr Tsipras said, adding that he was ready to negotiate for a “mutually acceptable” solution with the country’s lenders.

“There will be no rupture, but no continuation of subjugation either,” he said.

With more than 70 per cent of the vote counted, Syriza was on 36 per cent of the vote, which may see it within a hair’s breadth of an overall majority in the incoming parliament. Earlier, official projections estimated it would take 150 of the assembly’s 300 seats, meaning Syriza would now have to begin the search for a coalition partner.

In a speech replete with many of the phrases he has deployed throughout the election campaign, Mr Tsipras said the outcome had no winners or losers, apart from the “the Greece of elites and the oligarchs”.

He said his party’s victory was one for the “people of Europe who are fighting the austerity that is destroying our common European future”. Europe was changing and the Greek people were paving the way.

The result is the latest chapter in Syriza’s meteoric rise to power, which only five years ago would have been deemed impossible when Greece was a different place and Syriza was the country’s smallest party in parliament.

The result places Mr Tsipras, on the verge of becoming the country’s 186th prime minister. At 40, that would make him the youngest holder of the post since 1865.

“The time of the left has come,” the Greeks shouted, while Spanish and German well-wishers sang along with their own slogans.

The result has redrawn Greece’s electoral map and could mean outgoing prime minister Antonis Samaras faces a challenge for the leadership of his conservative New Democracy party.

In a performance viewed with deep concern by all other parties, neo-Nazi Golden Dawn, whose leadership is in jail pending a trial for running a criminal organisation, is likely to be the country’s third party.

The political earthquake in Athens is certain to dominate a scheduled meeting of euro zone finance ministers in Brussels today, which will be attended by Minister for Finance Michael Noonan.

On Friday, the euro group chair, Jeroen Dijsselbloem, said that while there was “room to manoeuvre” with Greece over its adjustment programme, any new left-wing government must honour existing agreements with the EU-IMF.

The ECB, which is providing emergency liquidity to Greek banks, has also said that any Greek debt held by the bank could not be restructured.

The prospect of further debt restructurings or writedowns for Greece should the Eurogroup agree to a renegotiated bailout programme would raise significant difficulties for the Irish Government, which appears to have abandoned its quest for retroactive direct recapitalisation of AIB and Bank of Ireland through the ESM fund due to the increased value of the two banks.

In comments from Davos that were carried in Greek media, Taoiseach Enda Kenny said “when you sign on for a debt write-down in terms of the bailout and the advantages they have got, there are conditions that have to be applied”.