Syrians stranded in Istanbul putting down roots out of necessity 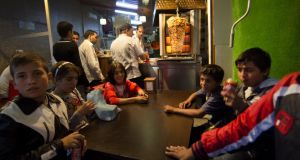 At the southwest corner of the looming Fatih Mosque in Istanbul, a small corner of Syria has recently sprung up.

Delicious fattoush salad dripped in pomegranate molasses is served; the famous Damascene fatier – dough covered with cheese, meat or spinach – is baked in-house. Bread, hummus and the sound of Syrian Arabic wafting through the air help any Syrian fleeing the conflict at home feel a little less homesick.

State-built camps
More than half a million Syrians are registered as refugees in Turkey with the actual figure likely to be far higher. Those in Istanbul, undoubtedly better off than Syrians living in refugee camps along Turkey’s southern border, are often overlooked. In a city of more than 14 million inhabitants, homeless Syrian families and, separately, the country’s once-wealthy middle class, make up a tiny number.

Turkish authorities have built 20 camps to house Syrians fleeing the violence and spent more than €550 million to face the growing crisis emanating from the country’s southern border. Turkey’s governing Justice and Development Party (AKP), a close ally of President Bashar al-Assad in Damascus until protests erupted in March 2011, has since become one of Assad’s most vocal critics.

In an interview with Turkish television earlier this month, Mr Assad warned Turkey of paying “a heavy price” for supporting “terrorists”, the term used by the Syrian government for rebels.

Sharing a 900km border with Syria, Ankara is fearful of blowback from pro-Syrian government elements. A double car bomb attack in the border town of Reyhanli last May killed 52, the worst terrorist attack in Turkey’s modern history.

However, the restaurant provides a comfortingly familiar setting and a welcome distraction from daily worries and the watching of images of the war at home on television screens.

Employment difficulties
Bab al-Hara opened last summer but three weeks ago was taken over by Abu Yasser, a former school teacher from Damascus. Abu Yasser has been in Istanbul less than a month and asked not to be fully identified as he has yet to acquire a full license for the restaurant.

“I employ 12 Syrians – only Syrians – from all parts of the country,” he says. “We are only opened two days but as you can see, business is good so far.”

Last year, the teacher fled Damascus for Saudi Arabia to stay with his son. His two brothers remain in the Syrian capital.

Generally, Syrians in Istanbul find work difficult to come by. Ibrahim (19) from the Damascus suburb of Zamalka, a district subjected to the chemical attack that killed more than 1,000 people on August 21st, has been waiting tables in Bab al-Hara for two months.

He left Syria a year ago and has been in Istanbul for the past six months.

“My family are still in Sham [Damascus] and my brother was in the Syrian army, but ran away,” he says, adding: “The work at the restaurant is good. Thank God.”

With no end to the war in sight for Syrians stuck in limbo in Istanbul, putting down roots here is a necessity, not a choice.

“I opened this restaurant to live. There’s a saying: ‘a small open river is better than a big, blocked sea,’ ” says Abu Yasser.

He sees the the conflict continuing well into the future. “I want the war to stop, but there is no solution is sight,” he says.

“The regime won’t fall and the opposition won’t give up.”