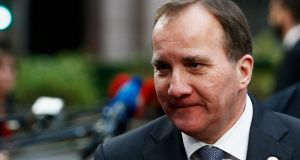 Swedish prime minister Stefan Lofven: “It has not been prosecuted and handled in the way we would wish,” he told Expressen newspaper. Photograph: Dean Mouhtaropoulos/Getty Images

Swedish police on Monday ordered an investigation into allegations that officers covered up accusations of sexual assault by mostly migrant youths at a music festival in Stockholm, a scandal that has drawn criticism from the prime minister.

The investigation comes after internal police reports published in Swedish media said about 50 suspects carried out sexual assaults against teenage girls at the “We are Sthlm” youth festival last August. Assaults also occurred in 2014 at the same festival, which attracts thousands of people.

“It’s a double betrayal of these young women,” prime minister Stefan Lofven told Expressen newspaper. “It has not been prosecuted and handled in the way we would wish. The second is that police did not inform or tell about these problems.”

Swedish media have drawn comparisons to attacks on women in Cologne and other German cities on New Year’s Eve that prompted more than 600 criminal complaints with police suspicion resting mostly on migrants and asylum seekers.

A record 163,000 asylum seekers arrived in Sweden last year, part of a wave of immigration that has resulted in the far-right Sweden Democrats becoming one of the country’s biggest political parties.

This year the centre-left government has tightened border controls with identity checks on the main border crossing with Denmark after concerns authorities were unable to cope with the influx of refugees.

Quoting internal police reports and police who were there, Dagens Nyheter newspaper painted a picture of sexual assaults at the festival, which had escalated in 2014 and more so in 2015, committed mostly by young Afghans.

There was no mention of ethnicity of perpetrators in the files, and a police spokesman could not immediately provide a figure of how many of the cases had been prosecuted.

Police at the time described the 2015 event as one with “relatively few crimes”.

However, some officials said the police force was concerned that assault reports could have boosted the far right.

“This is a sore point. Sometimes we dare not tell how it is because we think it plays into the hands of the Sweden Democrats,” Dagens Nyheter quoted Peter Agren, who was in charge of police at the event in 2014, as saying.

National police chief Dan Eliasson said on Monday political considerations should not be part of their activities.

“We have to get to the bottom of this,” Mr Eliasson told a news conference, adding the investigation would look at whether police officers had committed any crimes. He declined to discuss the ethnicity of the suspects.