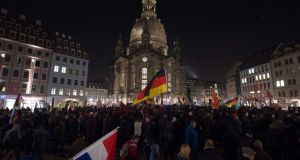 A rally by the anti-Islam group Pegida in Dresden, Germany. A new study has warned that Germany’s political centre is under attack from a ‘new irrationalism’. Photograph: Sebastian Kahnert/AFP/Getty Images

One in five Germans believe revolution and not reform is the best way to preserve living standards, according to a new study warning that Germany’s political centre is under attack from a “new irrationalism”.

Some 60 per cent of Germans quizzed by researchers at Berlin’s Free University described their homeland as an imperfect democracy where business has a greater say on daily life than voters. More than a third - 37 per cent - agreed that capitalism leads “inevitably to poverty and hunger”.

The 650-page survey, titled Against State and Capital - For the Revolution, is based on a representative survey by the Infratest dimap polling agency.

The study began life as a study of structural similarities between thinking in Germany’s extreme-left and extreme-right camps, in particular doctrinal fanaticism and claims to hold a monopoly on truth.

In total, the researchers found that about one sixth of Germans hold left-radical views, with some four per cent having a closed hard-left world view.

Some 14 per cent back violence against “the system” while nearly half - 46 per cent - spoke in favour of abolishing the state’s monopoly on the use of force.

Researchers noted in the results a growing suspicion of central government and of mainstream media, as well as an openness to conspiracy theories.

Recent developments suggest such thinking has already seeped into the German mainstream, from the rise of the Islam-critical Pegida movement in Saxony to empathy with Russia in the Ukraine standoff, twinned with suspicion at the influence of Nato and the role of Berlin.

For researchers, the data shows a clear, sizeable bloc of those who are anti-capitalist, anti-fascist and thinking critically about democracy in Germany.

A quarter-century after German unification, researchers said the results identified a “left-wing extremist potential” of 17 per cent in western Germany’s population, with a potential of 28 per cent in the former socialist east.

Some 42 per cent of the total German population saw socialism as a “good idea, poorly implemented”,a figure which rose to 59 per cent in eastern Germany. Some 41 per cent of the population agreed that “social equality for all is more important than freedom of the individual”.

With an eye on the recent NSA-Snowden affair, some 27 per cent fear state surveillance has put Germany on a slippery slope to a new dictatorship.

The spread of anti-establishment thinking can be seen beyond the usual quarters, particularly in the rise of the Alternative für Deutschland (AfD) party. Its eurosceptic, bailout-critical platform has found equal favour with older western German conservatives and eastern German left-wing voters, as well as with hard-left and extreme-right camps.

Seven decades after the second World War ended, the researchers have sounded the alarm bell, saying “outdated anti-fascist” thinking that “suns itself in its moral superiority” has done little to stop a drift from the political centre.

“Political danger is looming at the fringes,” the authors warn, “not least through old resentments and new irrationalism that has declared war on reason.”