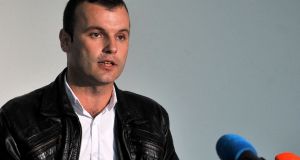 Bosnian Serb candidate for mayor of Srebrenica Mladen Grujicic: he denies that the massacre of 8,000 Muslim men and boys in the town in 1995 amounted to genocide, stoking fears among Bosniaks that the town’s tragic recent history could be played down. Photograph: Elvis Barukcic/AFP/Getty Images

Concern is growing in Srebrenica amid confusion over whether a Bosnian Serb, who denies that the 1995 massacre there was genocide, has ousted the Muslim Bosniak mayor in local elections.

Mladen Grujicic appears poised to become the first non-Bosniak mayor of Srebrenica since Bosnia’s 1992-1995 war, during which Bosnian Serb forces led by Gen Ratko Mladic slaughtered 8,000 Muslim men and boys in the town.

The so-called Dayton Accords that ended the war carved Bosnia into two semi-autonomous regions: the Serb-run Republika Srpska and the Muslim-Croat Federation.

The deal left Srebrenica inside Republika Srpska, and relations since have often been tense between Muslim mayors of the town and nationalist Bosnian Serb officials in the regional capital Banja Luka.

Preliminary results from Sunday’s local elections suggested that Srebrenica mayor Camil Durakovic had lost to Mr Grujicic, and Serb celebrations in the streets sparked minor scuffles as Bosniaks accused the revellers of singing nationalist songs redolent of the war.

Supporters of Mr Durakovic claimed that he could still triumph once absentee ballots had been counted, however, because most would come from Bosniaks who had not returned to Srebrenica after the massacre.

Police reinforcements were deployed to ensure order, but later moved to seize the ballot boxes after suspected discrepancies in the vote count fuelled fears of a fix on both sides of the ethnic divide.

According to Serbia’s B92 news outlet, Suad Arnautovic, a member of Bosnia’s national central election commission, said “strange things have been happening and the municipal electoral commission is under pressure.”

It was reported on Thursday that state election officials had decided to transfer the ballots from Srebrenica to Sarajevo to conduct the count there.

Like many Serbs, Mr Grujicic denies that the Srebrenica massacre amounted to genocide, stoking fears among Bosniaks that the town’s tragic recent history could be played down.

Mr Grujicic called reports about disputes over the election and unease in Srebrenica exaggerated, and he asked for calm via social media.

“I call on the citizens of Srebrenica, those who are in and those outside of Srebrenica, not to succumb to the staged instigation of panic in our town, and to remain calm and dignified,” the Balkan Insight news service quoted him as saying.

Mr Grujicic also made clear that the town hall would continue to commemorate the 1995 massacre.

Serbian president Tomislav Nikolic – an ally of warmongering Serbian nationalist leader Slobodan Milosevic in the 1990s who also denies the massacre was genocide – assured Bosniaks that the election “should not change anything”.

“A crime occurred at Srebrenica and the fact that a Serb will lead the municipality does not mean that we in Serbia will forget what happened during the war,” Mr Nikolic said.

A week before the vote, Republika Srpska held a referendum that Bosnia’s constitutional court had ruled illegal, prompting the region’s leader to be summoned for questioning.