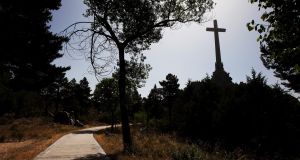 For the first time ever, a court has authorised the exhumation of bodies of Spanish republicans from a mass grave at the Valley of the Fallen, the resting place of the dictator Francisco Franco.

A local court in San Lorenzo de Escorial, near the site, has issued the authorisation for the remains of the brothers Manuel and Antonio Ramiro Lapeña Altabás, both killed in 1936, to be given a “dignified burial”.

Manuel, a labour union leader, was reportedly shot by Francoist forces in August of that year, weeks after the beginning of the civil war, which Franco won by defeating the elected republican government. Antonio was killed by a firing squad in October.

The brothers were buried in a mass grave in their hometown of Calatayud, in northeastern Spain. But in 1959, their remains were moved, along with those of thousands of others from both sides of the war, to unmarked graves in El Valle de los Caídos, or the Valley of the Fallen, northwest of Madrid.

Although Franco and his supporters claimed the Valley of the Fallen was a place of reconciliation for both sides of the war, it remains controversial. The burial place of Franco, who ruled Spain from the end of the civil war, in 1939, until his death in 1975, it bears the iconography of his far-right National-Catholicism ideology. The world’s largest cross rises 150m above it and the dictator’s tomb is situated at the end of a crypt dug into the mountain below by republican prisoners.

The court’s decision follows an appeal by María Purificación Lapeña Garrido, the granddaughter of Manuel and grand-niece of Antonio.

Spain’s political left, which has lobbied for a 2007 historical memory law to be implemented more rigorously, welcomed the ruling. Juan Pedro Yllanes, of the anti-austerity Podemos party, said “anything which advances the effective application of the law and ensures that those who died in the civil conflict or in the ensuing repression are treated as their families wish is absolutely crucial”.

However, the Francisco Franco Foundation, which promotes the legacy and image of Franco, opposes the court’s ruling. “It’s crazy to try and do this right now,” the organisation’s vice-president, Jaime Alonso, told The Irish Times. Mr Alonso warned that finding the two bodies will be extremely difficult and costly for the state, adding that the campaign by human rights groups and others to give Franco’s victims a decent burial was mistaken.

“It’s a sector of society driven by revenge, by hate, which can’t accept its own history and which is trying to win the war 80 years later,” he said.

Alberto Garzón, of the United Left coalition, said it was “incredible that in a European, democratic country there were still thousands of victims of firing squads in mass graves, who haven’t been identified or buried by their relatives as they deserve.”