Spain tense ahead of Catalan election

If Artur Mas and allies win, they plan to have independent Catalan state by 2016 or 2017 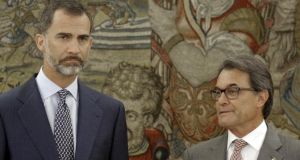 Spain’s King Felipe with Catalan governor Artur Mas after his arrival for their meeting at the Zarzuela palace in Madrid last month. Photograph: Andrea Comas/ Reuters

It was an awkward photo opportunity: King Felipe VI posing next to the regional premier of Catalonia, Artur Mas, ahead of their hour-long meeting at the royal palace in Madrid in mid-July. In the company of most politicians, the king tends to appear relaxed and jovial, but as the press cameras clicked away and Mas attempted some small talk, the monarch looked decidedly tense.

The king’s concern is understandable. On Monday, Mas announced formally a Catalan regional election for September 27th, which pro-independence parties and civic groups, all running on a shared ticket, are treating as a plebiscite on independence. If the nationalist Mas and his allies win, they plan to push ahead with a process that would see an independent Catalan state in existence in 2016 or 2017.

A few days after the Catalan leader explained these plans to the monarch during their meeting, King Felipe indirectly voiced the Spanish state’s now familiar opposition to the independence drive, warning that “respecting the law is . . . an unavoidable requirement for a democratic coexistence in a climate of peace and freedom”.

Just a few weeks ago there were a number of reasons to think Rajoy might be right.

Support for independence had dipped in the polls since Mas staged an unofficial referendum on the issue in November. In addition, the rise of the anti-austerity Podemos party appeared to offer Catalans who were unhappy with traditional Spanish politics an alternative to independence. Meanwhile, Mas’s centre-right Convergence party was having trouble agreeing with the powerful Catalan Republican Left (ERC) on how to proceed towards a breakaway from Spain.

But the announcement of the united electoral platform has given the independence camp momentum and made its goal suddenly look more feasible than it did a few weeks ago.

Unveiled on July 21st, the Junts pel Sí­ (“Together for Yes”) electoral list’s candidates include Mas and ERC leader Oriol Junqueras, the most visible political figures of the movement. But in an unusual move, the list also includes members of two major nationalist civic groups: the Catalan National Assembly (ANC) and Òmnium Cultural. In a further attempt to broaden the list’s appeal, soccer coach Pep Guardiola also figures on it.

At the presentation of the list, the candidates said that if they got a majority of seats in the Catalan parliament they would immediately declare intent to push ahead with independence. That would be followed by the drafting of a Catalan constitution, to be approved via referendum, in a process they expect to take between six and 18 months and which they envisage culminating in the creation of a new state.

Many Catalans complain that their relatively wealthy region of seven million inhabitants subsidises the rest of Spain with their taxes. They also claim Spain fails to understand Catalonia’s culture and represses its language.

“What kind of madness is this?” asked Miguel Ángel Revilla, the premier of the northern region of Cantabria, about the plan. “Beyond the sentimental aspect of saying ‘I’m a nation, I’m independent, long live Catalonia!’, this has terrible consequences for [Catalans] and for all Spaniards.”

Such outbursts have only added to the tensions between Madrid and Barcelona during what is normally a quiet holiday period. On hearing of Guardiola’s involvement in the pro-independence electoral list, Spanish foreign minister José Manuel García-Margallo accused the former soccer legend of having played for Spain “for financial reasons”.

But the seriousness with which the rest of Spain regards the nationalists’ road map to independence is more directly reflected by the fact that in recent days the media and some ministers have mooted the possibility of Madrid employing article 155 of the Spanish constitution. Never before implemented, in theory it allows the central government to revoke powers from Catalonia or any of the country’s other 16 regions, should their authorities be deemed to have violated the law.

“The Spanish state doesn’t use legal arguments, it uses arguments of fear and force,” Alfred Bosch, a congressional deputy for ERC, told The Irish Times. “We are expecting some kind of harassment – financial, legal or otherwise.”

The Rajoy government resorted to legal measures last autumn in a bid to block the November referendum – although Mas ultimately ignored court orders not to stage the vote (just over 80 per cent of Catalans voted in favour of independence then, but most of those who wanted to remain part of Spain did not vote). While the prime minister appears resigned to the September vote going ahead, if the pro-independence ticket wins he is almost certain to launch a legal offensive to prevent the process going any further.

A poll published by Público newspaper showed the pro-independence platform would win a slender majority of seats in the regional parliament.