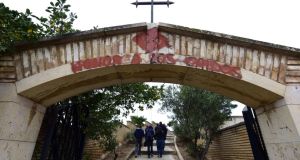 Spain will mark the 40th anniversary of the death of Francisco Franco today.

With the country still divided over the legacy of the dictator, activities will range from church services held in his honour to conferences discussing his human rights abuses.

Franco took power in 1939 after winning a three-year civil war, which he had unleashed by leading a military rebellion against a left-wing republican government.

He went on to rule Spain for 36 years, implementing his repressive National Catholicism ideology, before dying in bed at the age of 82 on November 20th, 1975.

Spain swiftly transformed itself into a parliamentary democracy. However, the anniversary of Franco’s death remains a significant date in the calendar for those who are nostalgic for the caudillo’s style of rule.

“The ideas and the principles that Franco represented during 40 years of government are and will always be an example for the Spanish people,” Jaime Alsonso, vice-president of the Francisco Franco Foundation, told The Irish Times.

Mr Alonso said that several Masses will be held in Franco’s honour today. One of them will be at the Valley of the Fallen, the huge mausoleum where the dictator is buried, 50km north of Madrid.

“There will be prayers for Franco and for José Antonio,” Mr Alonso said, in reference to José Antonio Primo de Rivera, the leader of the Falange, a quasi-fascist party that supported Franco during the civil war and his dictatorship.

Primo de Rivera is also buried at the site.

The religious order that maintains the Valley of the Fallen confirmed here would be a Mass dedicated to the two men.

On Thursday, investigating judge Baltasar Garzón formally requested that the government remove the remains of Franco and Primo de Rivera from the Valley of the Fallen and convert the site into a “place of memory”.

Timing his request to coincide with the anniversary, the judge has also called on the state to “apologise to victims of the Franco regime and their families as an expression of full acknowledgement and moral reparation”.

Judge Garzón is well known for taking up ambitious causes, having issued a warrant for the arrest of Chilean dictator Augusto Pinochet and represented Wikileaks founder Julian Assange.

A 2008 attempt by the magistrate to pursue Franco-era human rights abuses was blocked by the Spanish judiciary.

Campaigners estimate that well over 100,000 victims of Franco remain in unmarked graves.

Earlier this month, actors read out some of the testimonies of Franco’s victims on stage in Madrid’s Teatro del Barrio in a work called El pan y la sal (The Bread and the Salt).

Throughout this month, the University of Barcelona has staged a series of cultural and academic activities looking back at the regime.

Among the issues explored is the repression of Gypsies during the dictatorship and the relationship between Franco and other dictatorial regimes.

The anniversary is uncomfortable for the governing Popular Party (PP), whose previous incarnation was founded by former members of the Franco regime.

The PP has resisted prior attempts to transform the Valley of the Fallen as well as opposing a 2007 historical memory law.

Cristina Cifuentes, the PP’s premier of the Madrid region, said of the planned activities: “I don’t think the death of someone who was a dictator is an event that should be paid tribute to, but this is democracy.